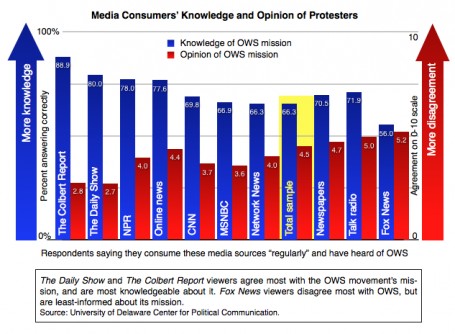 Among Fox News viewers, only 56 percent correctly identified the protesters’ main message as “too few people control the majority of the nation’s wealth and power.” The rest either incorrectly said that protesters’ main message was “there is too much regulation on business and industry” or did not answer the question. Consumers of other media sources included in the survey were more likely to know the right answer.

Fox News viewers, despite their relative lack of knowledge, maintained negative opinions about the protests. Fox viewers were more likely than consumers of other outlets to say they disagreed with the protesters.

Dannagal Young, assistant professor of communication, said “Anytime you give people an opportunity to enter an opinion echo chamber (like Fox News or MSNBC), their pre-existing opinions are only going to get stronger. The real danger comes when these polarizing opinions are based on inaccurate - or not enough - information.”

She added, “These results should quiet critics who argue that satirists like Stewart and Colbert are trivializing politics. The fact that their viewers hold strong positive opinions of the Occupy Wall Street protests and are the most informed regarding the protesters' main message shows that satire can be an important form of political information.

Paul Brewer, associate director for research of the Center for Political Communication, said, “Given that the issues raised by the Occupy Wall Street movement could play a key role in this year’s presidential election campaign, it’s interesting that Americans consuming a wide range of media sources tend to be sympathetic to the movement. It’s also striking how the audience that’s the biggest exception – Fox News viewers – is also the least informed about the movement.”

Freedom of AssemblyAlmost one third (31 percent) of Fox News viewers said Occupy Wall Street protesters “should not be allowed to protest in public places.” Less than a quarter of the full sample agreed.

Ralph Begleiter, director of the Center for Political Communication, said, “Our researchers found that Americans object to the Occupy movement’s right to protest in public places, despite the fact that freedom of assembly was written into the Bill of Rights by the founding fathers of our country. This finding is consistent, however, with past studies, which have also found that many Americans today would not support everything in the Constitution.”

AnalysisThe differences between Fox News viewers and the rest of the public in this survey were statistically substantial, even after taking into account the distinctive demographic and political makeup of the Fox News audience. A consistent finding of the study was that viewers of The Daily Show and The Colbert Report were on opposite ends of the spectrum from Fox News viewers on the questions asked by the researchers.

The study’s finding that Fox News viewers were relatively uninformed echoes previous national surveys. A 2003 University of Maryland Program on International Policy Attitudes survey showed that Fox News viewers were more likely than consumers of other media to be misinformed regarding the Iraq War. Another University of Maryland survey after the 2010 mid-term election reached similar conclusions about a wider range of issues.

MethodThe “Perceptions of the Occupy Wall Street Protests Survey” conducted telephone interviews with a nationally rep-resentative sample of 901 adults living in the continental United States. Telephone interviews were conducted by landline (541) and cell phone (360, including 170 without a landline phone). Princeton Survey Research Associates International administered the survey. Interviews were conducted in English from Jan. 18-25, 2012. Statistical re-sults are weighted to correct known demographic discrepancies. The margin of sampling error for the complete set of weighted data is ± 3.8 percentage points. Total sample results reported above are based on the 748 respondents who said they had heard about the Occupy Wall Street protests. Results for specific media sources are based on those who had heard about the protests and identified themselves as “regularly” viewing the source in question. All key findings in the report are statistically significant, even controlling for a range of demographic and political fac-tors. Charts combine respondents who “strongly” and “somewhat” agree with each of the survey items.

Question wordingQuestions 1 and 4 were based on items from an October 2011 survey conducted by Social Science Research Solu-tions. Questions 2a, 2b, and 2c were adapted from Douglas M. McLeod and Benjamin H. Detenber’s research on media coverage and public perceptions of social protests.1. “How much have you heard or read over the past few months about the protests and rallies held in New York City and other cities, called Occupy Wall Street: a lot, some, not much, or none at all?”2. “Now, please tell me how strongly you AGREE or DISAGREE with each of the following statements about the Occupy Wall Street protests. [Do you strongly agree, agree somewhat, disagree somewhat, or disagree strongly?]a. The protesters were out of lineb. The protesters should not be allowed to protest in public placesc. During the protests, the police used excessive force”3. “Please tell me how close your beliefs are to those of the Occupy Wall Street protesters using a scale from zero to 10. Zero means you completely DISAGREE with the protesters’ beliefs, and 10 means you completely AGREE with the protesters’ beliefs. Five means you do not agree or disagree with the protesters’ beliefs. You can use any number between zero and 10. Where on this scale would you place yourself, keeping in mind you can name any number between zero and 10?”4. “Which do you think comes closest to the Occupy Wall Street protesters’ main message? Is it that too few people control the majority of the nation’s wealth and power OR that there is too much regulation on business and industry?”