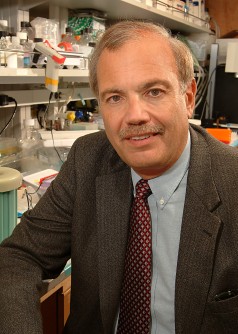 The study also found that a regimen without the drug Adriamycin, an anthracycline commonly used as a mainstay to treat breast cancer but one that, especially when paired with Herceptin, can cause permanent heart damage, was comparable to a regimen with Adriamycin. The data shows that anthracyclines aren’t necessary to treat early stage breast cancer effectively, and that the cardiac and other associated toxicities can and should be avoided, said study lead author Dr. Dennis Slamon, whose basic laboratory and clinical research led to the development of Herceptin.

“We’re encouraged that the survival advantages found in this study have been maintained and continue to be significant,” said Slamon, director of clinical/translational research at UCLA’s Jonsson Comprehensive Cancer Center. “I believe there’s room for even further improvement.”

Slamon said this is the first time that overall survival has been measured this far out - a little more than five years - in this population of breast cancer patients.

The study shows a survival advantage for patients in the Herceptin-containing arms, with 92 percent of patients on ACTH and 91 percent of patients on TCH still alive at five years, compared to 87 percent in the ACT arm. Estimated disease-free survival, or the time from treatment to recurrence, was 75 percent the ACT arm, 84 percent among those receiving ACTH and 81 percent in the TCH arm.

The study set out to specifically test Herceptin with and without anthracylines to determine whether oncologists could provide a therapy as effective as ACTH without the resulting toxicities, including congestive heart failure and other cardiac problems. The study, Slamon said, showed that the women who did not receive Adriamycin had outcomes similar to those who did, but had much less heart toxicity.

The women who did receive Adriamycin and Herceptin had a five-fold greater increase of experiencing congestive heart failure and a two-fold increase of sustained cardiac dysfunction without symptoms. The women getting Adriamycin and Herceptin also experienced worse “acute” toxicities, such as nausea, diarrhea, vomiting, neuropathy, fatigue and falling white blood counts, Slamon said. Additionally, seven women in the anthracycline arms developed acute leukemia, a rare and deadly side effect of Adriamycin. One woman in the non-Adriamycin arm did develop an acute leukemia after receiving an anthracyline outside the study, Slamon said.

“Given the data in this study, it makes one really question what role Adriamycin should play in the treatment of HER-2 positive early breast cancer, or in the treatment of early breast cancer at all,” Slamon said. “This trial should impact the way these breast cancers are treated, with a non-anthracycline regimen being our preferred option. I think this is a change that is going to be slow in coming, unfortunately, as many of our adjuvant treatments for breast cancer are built on the backbone of anthracyclines. While they’re effective, whatever gain patients may receive is more than made up for in the serious and chronic long-term side effects.”

Conducted by the Breast Cancer International Research Group (BCIRG), the study enrolled 3,222 women with early stage breast cancer between April 2001 and March 2004. Patients were randomized to one of the three arms.

The study’s primary endpoint was disease-free survival, but it also measured overall survival, safety, including cardiac toxicities, pathologic and molecular markers and quality of life.

“An improved understanding of the molecular basis of malignant disease is allowing the development of rational treatment strategies that are more effective and less toxic than traditional empiric regimens,” the study states. “The identification and characterization of the HER-2 alteration in a subset of human breast cancers and the subsequent development of Herceptin represent the practical realization of this translational ideal. Our findings show that we can further exploit this new and translational knowledge to optimize efficacy while simultaneously minimizing acute and chronic toxic effects.”

An editorial that accompanies the article states that the data in the study “suggest that a non-anthracycline regimen is an acceptable standard of care. The present is clearly brighter for patients with HER-2 positive breast cancer and the future promises to shine even more.”

The study was sponsored by Sanofi-Aventis and Genentech and was funded in part by the Department of Defense, the Revlon/UCLA Women’s Cancer Program, the U.S. Army Medical Research and Development Command, the National Cancer Institute, the California Breast Cancer Research Program and the Peter and Denise Wittich Family Project for Emerging Therapies in Breast Cancer.

UCLA's Jonsson Comprehensive Cancer Center has more than 240 researchers and clinicians engaged in disease research, prevention, detection, control, treatment and education. One of the nation's largest comprehensive cancer centers, the Jonsson center is dedicated to promoting research and translating basic science into leading-edge clinical studies. In July 2011, the Jonsson Cancer Center was named among the top 10 cancer centers nationwide by U.S. News & World Report, a ranking it has held for 11 of the last 12 years. For more information on the Jonsson Cancer Center, visit our website at http://www.cancer.ucla.edu.