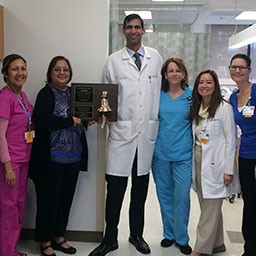 Newswise — A large silver bell hangs on a wooden plaque at the entrance of City of Hope | Antelope Valley’s chemotherapy infusion area. To many, the bell is just hanging décor in the community clinic, but for cancer patients undergoing chemotherapy, it represents much more than that. The ringing of the bell signifies the end of active treatment and the beginning of a new path. The bell was donated by 52-year-old Antelope Valley resident Maria “Becky” Velazquez-McIntyre. She was the first patient to ring the bell on July 9, 2015, when she completed treatment for ovarian cancer. Since then 70 more patients in Antelope Valley have done the same. A bell hanging in City of Hope’s main Duarte campus has been rung by more than 200 patients since it was donated by Velazquez-McIntyre two summers ago. And now Velazquez-McIntyre is taking the survivor bell ritual to the rest of the 13 City of Hope community practice sites. “The bell represents hope and a sense of accomplishment,” said Velazquez-McIntyre. “My goal is to give someone else going through chemotherapy that hope. If I can ring that bell, so can you.” The gift of the bell was inspired by a similar gift from a naval officer treated at a different institution for head and neck cancer some years ago. During his time with the Navy, officers would ring a bell to signal the end of a mission, so the officer decided to bring that tradition to his own hospital so patients like himself could celebrate a mission accomplished. Velazquez-McIntyre brought the tradition to City of Hope, not only as a thank you to her doctors and the staff who cared for her, but to encourage other cancer patients. She dedicated the bell to her father, who passed away from colon cancer. Velazquez-McIntyre is an inspiration not only to other patients, but also to City of Hope employees. “Seeing patients ring the bell is really inspiring and encouraging not only for patients, but for their family members and friends,” said Terri Gore, senior manager of physician relations in Antelope Valley. “Becky represents the core of what City of Hope stands for and that’s the delivery of compassion for everyone.”