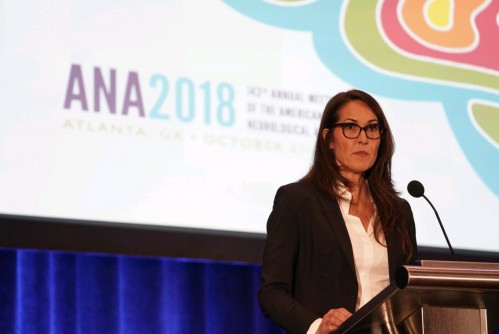 Newswise — In the fall of 2013, Robin Williams began suffering symptoms of a disease whose name he would never know but would cause him to take his life in August 2014.

“I felt like I was watching my husband disintegrate before my eyes and there was nothing I could do about it,” said Susan Schneider Williams, widow of the late actor and comedian told 1,000 neurologists and neuroscientists at the American Neurological Association’s 143rd Annual Meeting.

As the keynote speaker for the Presidential Symposium, “Lewy Body Dementia (LBD): From Symptoms to Synuclein,” Williams put a human face on the leading-edge science presented.

LBD is the second most common type of degenerative dementia, yet little is understood about its pathogenesis including the cause of synuclein accumulation in the cerebral cortex, its spread through the brain, how synuclein leads to neuronal dysfunction, and the relationship of LBD to Parkinson’s disease. Symptoms are varied, ranging from hallucinations to digestive issues, and can be fleeting, appearing for months at a time only to quickly disappear and be replaced by new ones.

After more than a year of devastating physical and psychological symptoms that included severe anxiety, paranoia, and movement dysfunction, Robin Williams’ medical team arrived at a Parkinson’s disease diagnosis. A few months later, “exhausted from the terror coming from his brain, Robin took his life before it could take more of him,” Williams said.

The coroner’s report revealed the true source of Robin Williams’ illness: LBD, one of the most extreme cases the physicians had ever seen. “Robin had diffuse LBD throughout his brain and brain stem, with a concentration in his amygdala, as well as amyloid plaques and tau tangles. I used to tell people that he had a dementia cocktail,” Williams said.

While some of the nearly 40 symptoms that characterize LBD are common, such as anxiety, sleeplessness, and depression, “the challenge to diagnosing and ending LBD is seeing it as the giant constellation it is, rather than a few of its stars,” Williams explained.

Research presented at the symposium offered hope that effective therapies for LBD are on the horizon.

“The ultimate goal is to use genetics and biomarkers to identify patients at risk of development Lewy body dementia and provide them with targeted treatments. What we’re working toward is catching patients in the early symptomatic stages so that we can develop more effective therapies,” said Dimitri Krainc, MD, PhD, Northwestern University Feinberg School of Medicine, and 2018 ANA Soriano Lectureship Award recipient.

Since her husband’s death, Williams has been a committed advocate for LBD research and awareness.  She has traveled to Washington to educate policymakers on the need for funding to better understand this elusive disease, and serves as vice chair of the American Brain Foundation, which provides grants to support research on neurodegenerative diseases.

“I believe that Robin’s death and his battle against these diseases holds a profound purpose. There was power in what he suffered. I’m here to see that power transformed into something good.”

Renowned academic neurologists participating in the Presidential Symposium and their topics include:

Susan Schneider Williams, the widow of Robin Williams, shared her perspective on living with someone affected by LBD

About the American Neurological Association (ANA)

From advances in stroke and dementia to movement disorders and epilepsy, the American Neurological Association has been the vanguard of research since 1875 as the premier professional society of academic neurologists and neuroscientists devoted to understanding and treating diseases of the nervous system.  Its monthly Annals of Neurology is among the world’s most prestigious medical journals, and the ANA’s Annals of Clinical and Translational Neurology is an online-only, open access journal providing rapid dissemination of high-quality, peer-reviewed research related to all areas of neurology.  The acclaimed ANA Annual Meeting draws faculty and trainees from the top academic departments across the U.S. and abroad for groundbreaking research, networking, and career development.  For more information, visit www.myana.org or @TheNewANA1