Minimally Invasive, Cost-Effective Alternative to Endoscopy Identifies Precursor to Cancer of the Esophagus 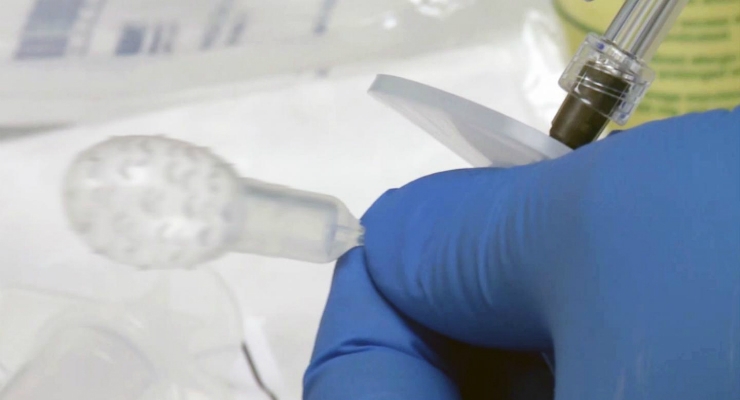 Investigators developed the test for early detection of Barrett’s esophagus that offers promise for preventing deaths from esophageal adenocarcinoma. The test involves a novel swallowable balloon device that samples the esophagus and a DNA assay that detects Barrett’s esophagus and esophageal cancers. In a major step to bringing this technology forward to patients, the balloon device has just received 510K clearance from the U.S. Food and Drug Administration (FDA) for clinical use. The now FDA-cleared device is being manufactured by Lucid Diagnostics and marketed under the tradename EsoCheck.

The test involves a novel swallowable balloon device that samples the esophagus and a DNA assay that detects Barrett’s esophagus and esophageal cancers. In a major step to bringing this technology forward to patients, the balloon device has just received 510K clearance from the U.S. Food and Drug Administration (FDA) for clinical use. The now FDA-cleared device is being manufactured by Lucid Diagnostics and marketed under the tradename EsoCheck.

Barrett’s esophagus (BE) is the precursor lesion of esophageal adenocarcinoma (EAC), a highly lethal cancer with more than 80% mortality at five years. Lethal EAC can be prevented when patients are diagnosed at the precursor stage of BE, and early foci of near cancerous changes (dysplasias) are ablated. However, detection of BE has traditionally necessitated endoscopy, an expensive and invasive test that requires sedation and is thus unsuitable as a method for wide BE screening.

In a significant step forward, the investigator team developed an easy, five-minute outpatient test that is more than 90% sensitive for detecting individuals with BE. Patients simply swallow a pill-sized capsule attached to a thin silicone catheter. After delivery to the stomach, the small balloon inside the capsule, is inflated by injecting air through the catheter. The inflated balloon is maneuvered to swab the lower esophagus near the stomach, the region where BE begins, and obtain a sample of the lining cells. Surface texturing on the balloon increases the effectiveness of the sampling. The balloon is then deflated through the catheter and inverted back into the capsule, thus protecting the esophagus sample from dilution or contamination.

After easy retrieval of the capsule through the mouth, DNA is extracted from the balloon surface and tested for aberrant DNA methylation that the investigators discovered is diagnostics of BE.

“Our goal is early detection,” said Chak. “Symptoms of Barrett’s esophagus, such as heartburn, can also be commonly seen in individuals who have acid reflux disease without BE. These symptoms can easily be treated by over the counter medications so people often don’t get tested for BE, particularly by an invasive test such as endoscopy. As a result, when individuals develop EAC, 95% of the time the presence of the prior Barrett’s esophagus was undetected and unknown. We wanted an easier, less costly test that could provide a practical way for screening and early detection of individuals with BE, who can then be followed closely to prevent development of EAC.”

“Furthermore,” Chak said, “FDA clearance of the EsoCheck device means the device is now available to patients and physicians as a non-endoscopic method for sampling the esophagus. This will make it much easier to detect Barrett’s esophagus in the outpatient setting.”

Under sponsorship from the SPORE and BETRNet programs, supported by and housed within the Case Comprehensive Cancer Center, Chak led a clinical trial in which 86 individuals were tested using the swallowable esophageal balloon device. In the clinical trial, patients tolerated the balloon test well, with 82% reporting little to no anxiety, pain, or choking, 93% stating they would repeat the procedure again, and 95% stating they would recommend the test to others.

Helen Moinova, PhD, study first author and instructor at the School of Medicine, led a parallel effort within the Markowitz laboratory to identify DNA changes diagnostic of Barrett’s. Using genome-wide sequencing approaches, Moinova identified two genes, VIM and CCNA1, that each get chemically modified by DNA methylation in BE.

“Having two accurate biomarkers increases confidence in our ability to correctly diagnose Barrett’s esophagus,” said Moinova. “Taken together, our findings show that non-endoscopic balloon sampling paired with molecular tests for the methylated VIM and CCNA1 biomarkers is effective in addressing the need for simple, non-invasive, safe, and accurate Barrett’s esophagus screening.”

Moinova’s DNA methylation test was more than 90% accurate in detecting BE or in recognizing an esophagus as normal in the patient samples that were collected using the balloon device by Chak’s multicenter BETRNet team.

Willis is currently leading a National Institutes of Health (NIH)-supported effort to implement the VIM and CCNA1 DNA tests as a standardized clinical laboratory test that will be provided by the University Hospital’s pathology department. The team is also working with Lucid Diagnostics to nationally provide the VIM and CCNA1 DNA assays for use in testing DNA from patients who use the EsoCheck device.

“We are fortunate to be the only academic medical center in the country to which the NIH has awarded both a GI Cancers SPORE and a BETRNet program.” Markowitz said. “The $18 million in support from these NIH awards has allowed us to build a premier team for developing new approaches for early detection, prevention and treatment of GI cancers. However, credit for this advance most importantly belongs to each of the patients who so generously participated in the clinical trial of this exciting new technology.”

In addition to support from the NIH, the work also received support from the American Cancer Society, the Case-Coulter Partnership for Translational Research and the Ohio Third Frontier Technology and Validation Start-Up Fund. Case Western Reserve University has filed patents on the esophageal balloon device and the VIM and CCNA1 DNA tests.