Swarm of Hydrogen Clouds Flying Away from Center of Our Galaxy 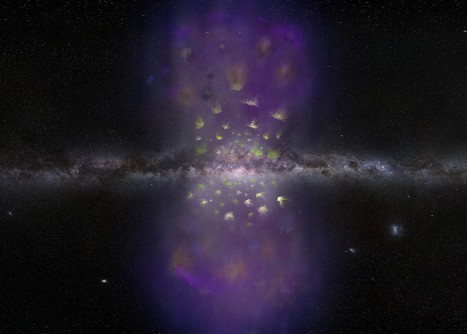 GBT reveals hydrogen clouds flying out of the Milky Way in the Fermi Bubbles.

Newswise — A team of astronomers has discovered what appears to be a grand exodus of more than 100 hydrogen clouds streaming away from the center of the Milky Way and heading into intergalactic space. This observation, made with the National Science Foundation’s Green Bank Telescope (GBT), may give astronomers a clearer picture of the so-called Fermi Bubbles, giant balloons of superheated gas billowing out above and below the disk of our galaxy.

The results are presented today at the 231st meeting of the American Astronomical Society in Washington, D.C.

“The center of the Milky Way is a special place,” notes Jay Lockman, an astronomer at the Green Bank Observatory in West Virginia. “At its heart is a black hole several million times more massive than the Sun and there are regions of intense star birth and explosive star destruction.”

These energetic processes, perhaps individually or together, have generated a powerful cosmic “wind” that has blown two enormous bubbles above and below the disk of the Milky Way that are filled with gas at tens-of-millions of degrees. This superheated gas, however, shines feebly at radio, X-ray and gamma-ray wavelengths.

The bubbles appear prominently in observations made by NASA’s Fermi Gamma-ray Space Telescope, which is why astronomers refer to them as the Fermi Bubbles.

“One problem that hinders study of this hot cosmic wind is that the gas has such low density that its emission is very faint, so there is no practical way to track its motion,” notes Lockman. “This is where the hydrogen clouds come in.”

Just like a handful of dust thrown into the air can show the motion of wind on Earth, the hydrogen clouds can act as test particles revealing the flow of the hotter, invisible wind from the center of the Milky Way.

Neutral hydrogen gas, the principal component of these clouds, shines brightly at the radio wavelength of 21 centimeters. These hydrogen clouds were first discovered by a team led by Naomi McClure-Griffiths of the Australian National University using a radio telescope array in Australia. However, that survey was confined to a region just a few degrees around the galactic center, so it gave only limited information on the number and extent of these clouds.

New research with the 100-meter GBT greatly extends these observations.

A group led by Lockman, McClure-Griffiths, and Enrico DiTeodoro, who is also with the Australian National University, mapped a much larger area around the galactic center in search of additional hydrogen clouds that might be entrained in the nuclear wind. They found a gigantic swarm of more than 100 high-velocity gas clouds. The properties of these clouds allow the scientists to learn about the shape of the wind-blown region and the enormous energies that are involved.

“The signature of these clouds being blown out of the Milky Way is that their velocities are crazy,” said Lockman. “Gas motions in the Milky Way are usually quite regular and are dominated by the orderly rotation of the Galaxy. In the Fermi Bubbles we see clouds right next to each other on the sky that have velocities differing by as much as 400 kilometers per second.”

According to the researchers, the most likely explanation for these wildly differing velocities is that they’re traveling within a cone of material that is expanding upward and away from the galactic center, so the front portion is coming toward us and the back part is flying away.

By modeling the distribution and velocities of the clouds, the astronomers found that they would fill a cone stretching above and below the galaxy to a distance of at least 5,000 light-years from the center. The clouds have an average speed of about 330 kilometers per second.

Di Teodoro notes: “What is especially puzzling is that we have not yet found the edge of the swarm of clouds. Somewhere above the galactic center, the hydrogen clouds have to dissipate or become ionized. But we have not found that edge yet, so there’s still a lot to learn.”

The Green Bank Observatory is a facility of the National Science Foundation operated under a cooperative agreement with Associated Universities, Inc.