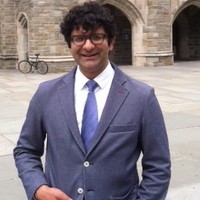 Swarthmore College Visiting Assistant Professor of Political Science Shervin Malekzadeh is available for comment on the political dynamics of Iran and its influence on the tentative nuclear deal.

Malekzadeh, who recently wrote about the topic for The Washington Post, argues that the domestic politics of nationalism, not the ideology of political Islam, makes Iran's hardliners wary of the deal.

"Iranian opponents of diplomacy see their rivals' pursuit of peace as an act of bad faith, of selling out the country, which is similar to what is happening in the United States," he says.

Ironically, Malekzadeh believes that Iran's lack of democracy will probably make it easier to convince the Iranian Majles to sign on to a deal than the U.S. Congress.

An accidental reporter and participant in the Iranian Green Movement, Malekzadeh has provided commentary on the media in Iran for various media outlets, including The Atlantic, The Washington Post, Al Jazeera, and Folha de São Paulo.

If you are interested in speaking with Malekzadeh, please contact Mark Anskis in the Swarthmore communications office ([email protected] / 610-328-8271).