The remarkable properties of a new, porous material could lead to advances in microscopic sponging

Created by chemists at the University at Buffalo and Penn State Hazleton, this sponge-like crystal contains many pores that change shape when exposed to ultraviolet (UV) light. In addition, the normally colorless crystal (left) blushes in the presence of UV light, turning red (right). 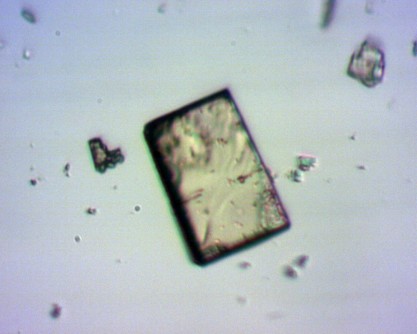 The crystal is colorless before exposure to ultraviolet light. 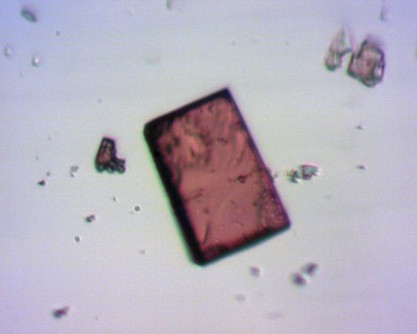 The crystal turns red after exposure to ultraviolet light.

Newswise — BUFFALO, N.Y. — The sponges of the future will do more than clean house.

Picture this, for example: Doctors use a tiny sponge to soak up a drug and deliver it directly to a tumor. Chemists at a manufacturing plant use another to trap and store unwanted gases.

These technologies are what University at Buffalo Assistant Professor of Chemistry Jason Benedict, PhD, had in mind when he led the design of a new material called UBMOF-1. The material — a metal-organic framework, or “MOF” — is a hole-filled crystal that could act as a sponge, capturing molecules of specific sizes and shapes in its pores.

Swiss cheese-like MOFs are not new, but Benedict’s has a couple of remarkable qualities:

• The crystal’s pores change shape when hit by ultraviolet light. This is important because changing the pore structure is one way to control which compounds can enter or exit the pores. You could, for instance, soak up a chemical and then alter the pore size to prevent it from escaping. Secure storage is useful in applications like drug delivery, where “you don’t want the chemicals to come out until they get where they need to be,” Benedict says.

• The crystal also changes color in response to ultraviolet light, going from colorless to red. This suggests that the material’s electronic properties are shifting, which could affect the types of chemical compounds that are attracted into the pores.

Benedict’s team reported on the creation of the UBMOF on Jan. 22 in the journal Chemical Communications. The paper’s coauthors include chemists from UB and Penn State Hazleton.

“MOFs are like molecular sponges — they’re crystals that have pores,” Benedict said.

Benedict is a member of UB’s New York State Center of Excellence in Materials Informatics, which the university launched in 2012 to advance the study of new materials that could improve life for future generations.

MOF crystals are made from two types of parts — metal nodes and organic rods — and the researchers attached a light-responsive chemical group called a diarylethene to the organic component of their material.

Diarylethene is special because it houses a ring of atoms that is normally open but shuts when exposed to ultraviolet light.

The next step in the research is to determine how, exactly, the structure of the holes is changing, and to see if there’s a way to get the holes to revert to their original shape.

Rods containing diarylethene can be forced back into the “open” configuration with white light, but this tactic only works when the rods are alone. Once they’re inserted into the crystal, the diarylethene rings stay stubbornly closed in the presence of white light.

Caption: Created by chemists at the University at Buffalo and Penn State Hazleton, this sponge-like crystal contains many pores that change shape when exposed to ultraviolet (UV) light. In addition, the normally colorless crystal (left) blushes in the presence of UV light, turning red (right). 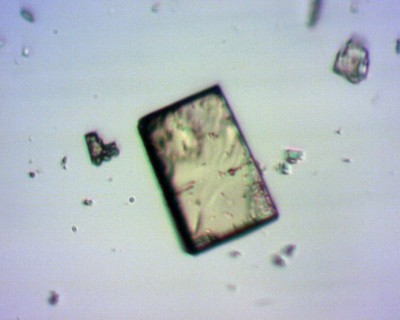 Caption: The crystal is colorless before exposure to ultraviolet light. 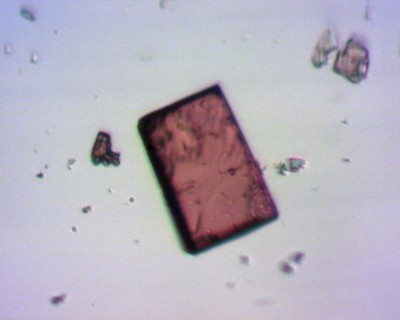 Caption: The crystal turns red after exposure to ultraviolet light.