Newswise — Researchers from the University of Washington are using high-tech tags to record the movements of swordfish — big, deep-water, migratory, open-ocean fish that are poorly studied — and get a window into the ocean depths they inhabit.

The researchers tagged five swordfish in late August off the coast of Miami: Max, Simone, Anthony, Rex and Oliver. Their movements can now be viewed in near-real time. And although swordfish are a prized catch, these ones aren't at higher risk, researchers say, since the website updates only every few hours and these fast-swimming fish spend most of their time far from shore.

"These are animals that migrate into the ocean's twilight zone that we know next to nothing about," said Peter Gaube, an oceanographer at the UW Applied Physics Laboratory. "Swordfish in different regions have very different behavior. We hope to learn more about these amazing animals and their environment as they migrate between regions."

This is the first time satellite position tags have successfully been placed on swordfish caught off the coast of the United States.

Earlier tags on swordfish relied on measurements of temperature and light to approximate the animal's position, which resulted in errors greater than 60 miles (100 km). The new tags act together as a pair: One records detailed temperature, light and depth measurements as the fish is swimming, while the other beams back the precise location when the fish surfaces each day.

By comparing the saved observations with computer reconstructions of ocean conditions, the researchers can re-create an individual fish's precise travel path in three dimensions, allowing for the first time scientists to understand where these animals feed and providing new insight into deep-sea ecosystems.

"Swordfish are different from the surface-oriented fish that have been tagged, like sharks or whales — these are deep-sea fish," Braun said. "But because they migrate up and down every day, they break the surface, and the new types of tags allow incredibly fast communication."

Swordfish often jump at the surface, a behavior that helps make them a popular target for sport fishing.

"That's why we're so excited," Braun said. "Swordfish are a particularly good platform to help us make observations in the deep ocean, while at the same time giving us a better understanding of why and how this predator makes a living."

Recently, the UW researchers customized satellite tags made by Wildlife Computers of Redmond, Washington, to work on swordfish. These top predators swim long distances, commonly reach 10 feet (3 meters) in length, and are named for the long, flat bill they use to slash and injure prey.

The fish can swim at 50 miles per hour and typically spend the day at a third of a mile (550 meters) deep. They rise to the surface at night, along with millions of other fish and squid, upon which the swordfish feed.

A recent paper by Braun, Gaube and collaborators, published in June in the ICES Journal of Marine Science, analyzed 16 swordfish tagged with simpler tags in the western Atlantic, off Florida and the Grand Banks, and in the Northeast Atlantic, off the coast of Portugal. The results show that juvenile swordfish tagged off Portugal tended to stick to that area, while the mostly adult individuals tagged in the western Atlantic swam long distances between the Grand Banks off Newfoundland and the waters near Cuba.

With the new Florida-based project the team hopes not only to learn more about swordfish but to further explore the mesopelagic, or "twilight zone" of the Atlantic Ocean. These partially lit waters from a tenth to half a mile (200 to 800 meters) in depth are hard to reach and poorly studied, even as fishing is beginning to target these environments.

In January the researchers plan to tag more swordfish in the Red Sea, off the coast of Saudi Arabia.

"This will provide the baseline data we need to understand this ecosystem before it is exploited any further," Gaube said.

The initial phase of the Florida swordfish-tagging project was funded by the Woods Hole Oceanographic Institution. Researchers are looking for support from community members, in the sport fishing community, environmental groups or others, to monitor other swordfish and gather more data.

Next the team is designing new tags that can hold more sensors that could measure properties such as acceleration, depth, water temperature, muscle temperature and stomach temperature. The next-generation tags could also include cameras that could be set to trigger based on various behaviors, such as when the fish dives to a certain depth. They hope to eventually use results from the Florida tagging project to guide shipboard sampling of the marine environment alongside swordfish “oceanographers.” 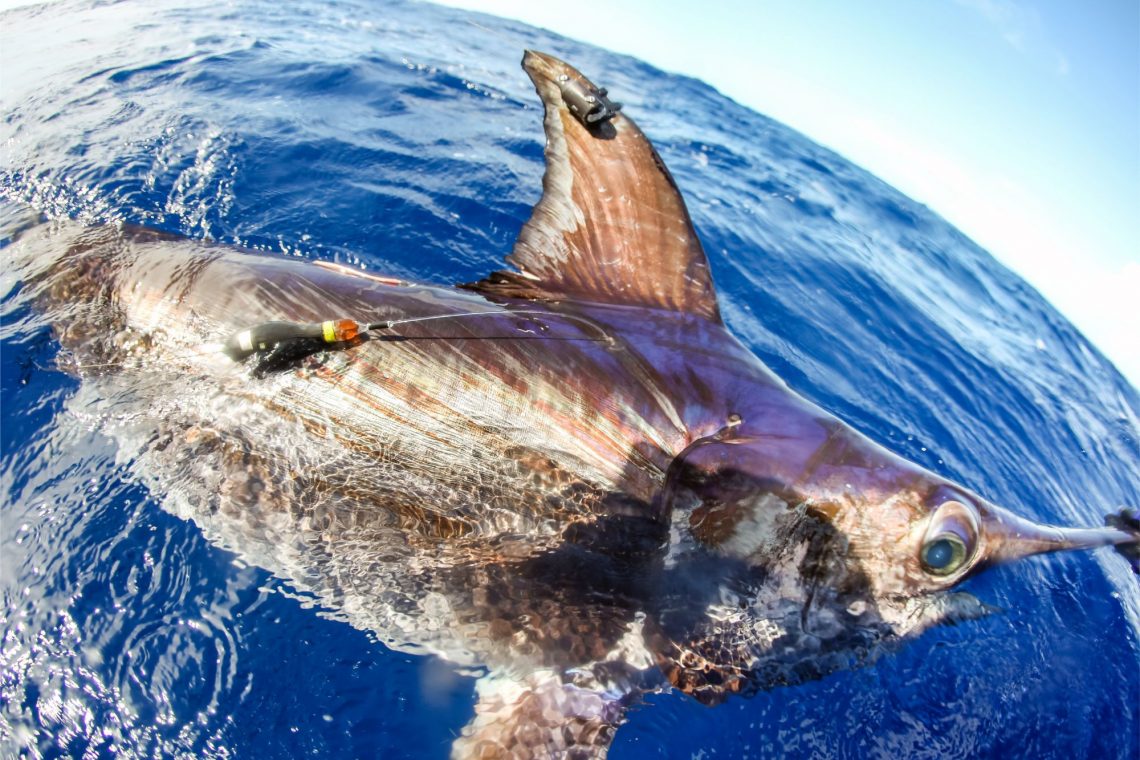 Caption: Two tags were attached to this swordfish off the coast of Florida in August. A small antenna on the fin sends data when the fish breaks the surface. The black rubber bulb takes detailed measurements of water pressure and temperature. The two tags, made by Wildlife Computers, communicate with the scientist using satellite communication. 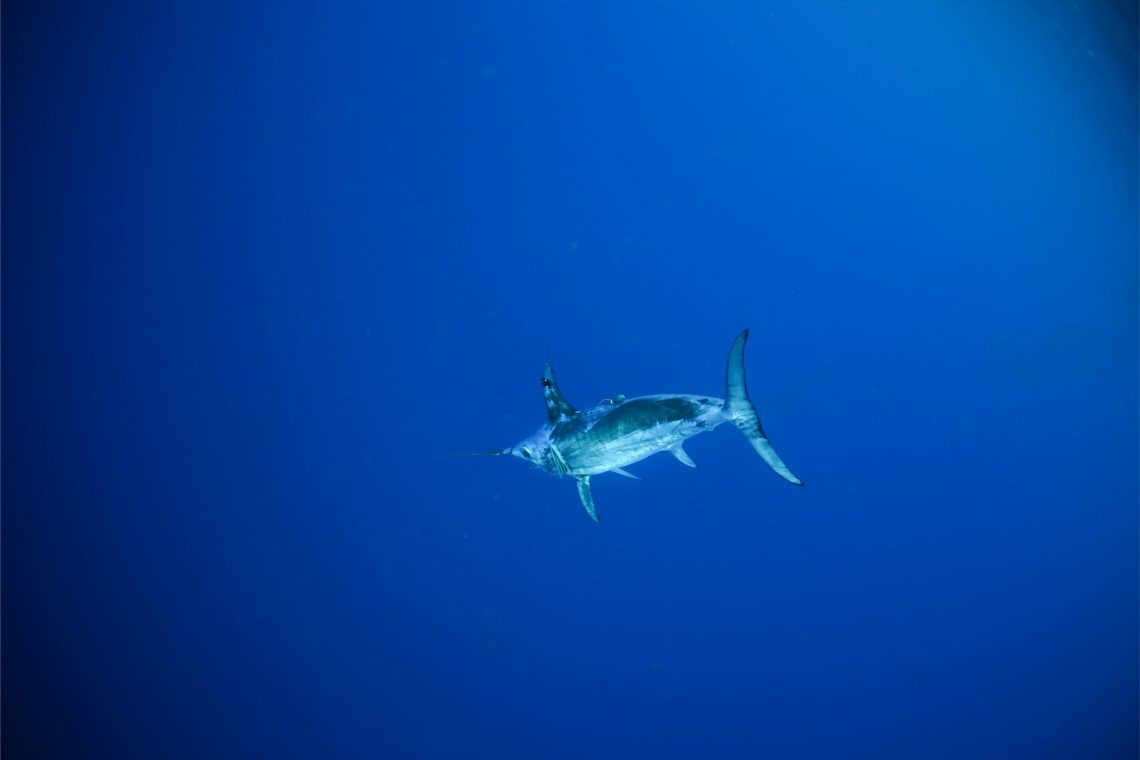 Caption: A newly tagged swordfish swims back into the ocean twilight zone in August 2019 off the coast of Miami. As of early October, this fish had traveled 350 miles to the north. 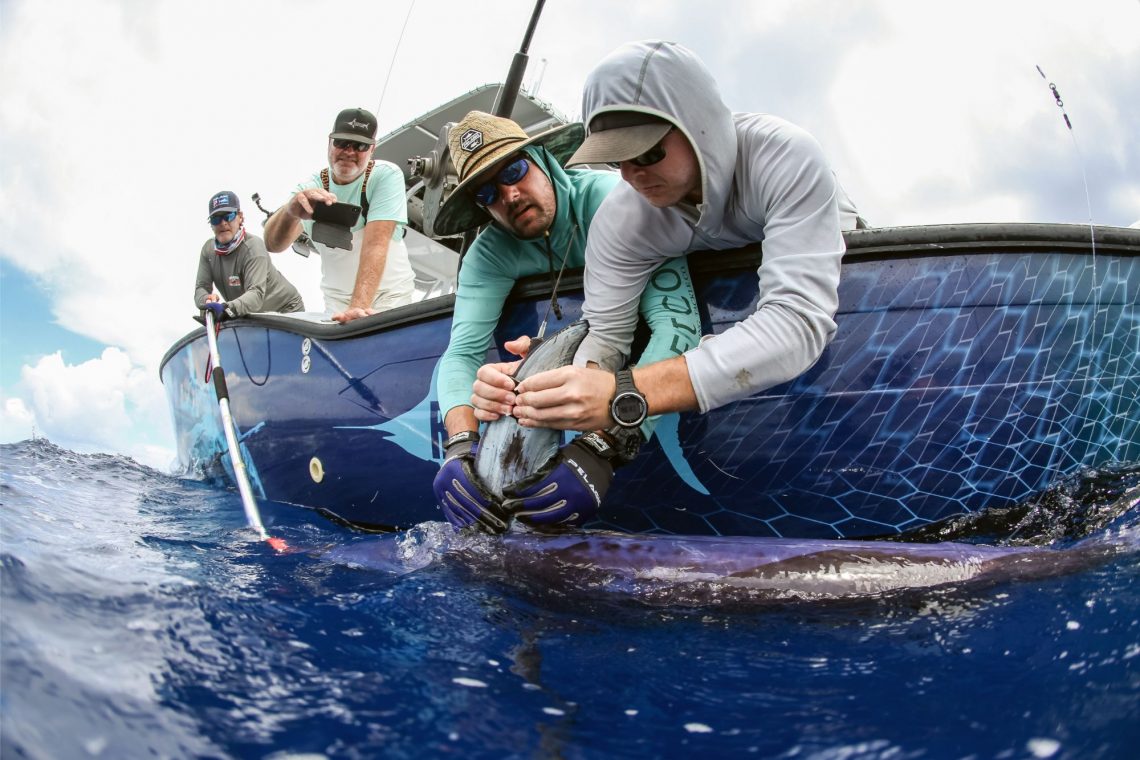 Caption: Peter Gaube (wearing purple gloves) and Camrin Braun (far right) attach a satellite tag on a swordfish in August 2019 off the coast of Florida.

Caption: This tag has just been attached to a swordfish off the coast of Miami in August 2019. The flexible rod acts like an antenna that sends information via satellite when the fin breaks the surface. 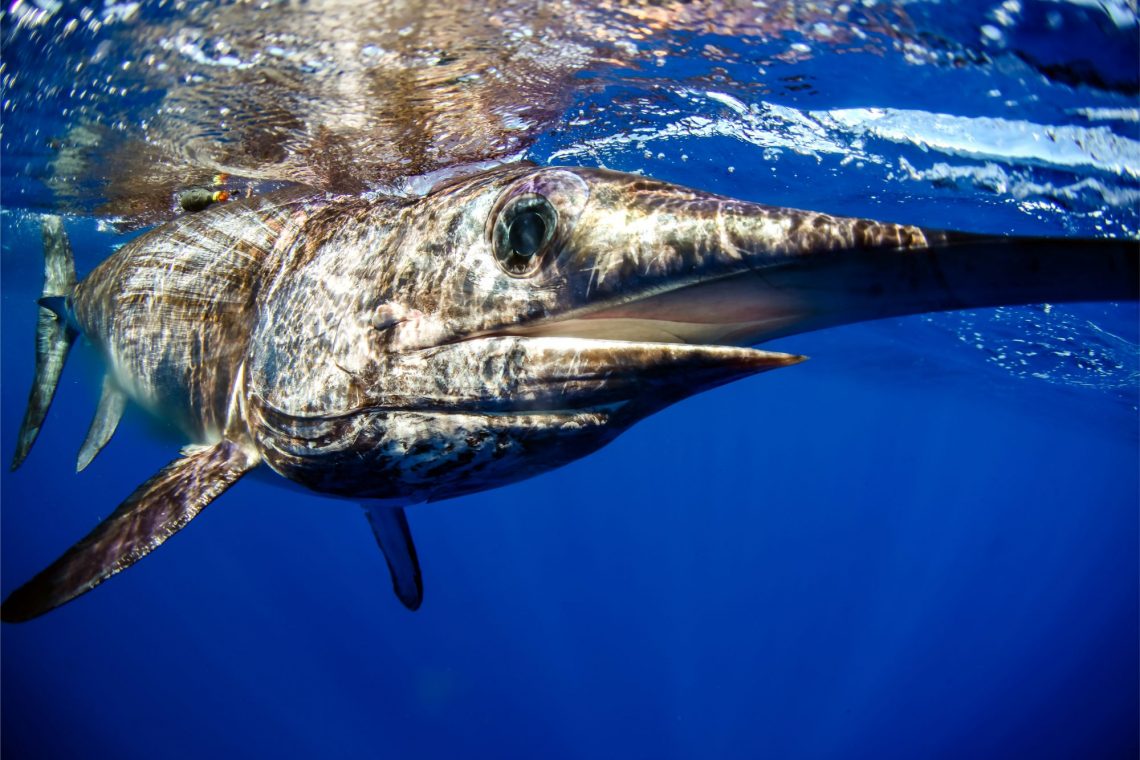 Caption: This swordfish is now being tracked on an online map. Swordfish are in a family of their own, can grow to 10 feet long, and are among the fastest long-distance swimmers in the sea.