Symposium to Look at Genetic Basis of Exercise

Episode 19: The Genetics of Exercise 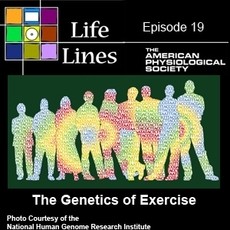 Episode 19: The Genetics of Exercise

Newswise — 'Adaptation to exercise' is a familiar phenomenon, even if the phrase is not: A sedentary person takes up jogging and can barely make it around the block. After jogging regularly for a few weeks, the person can jog a mile, then two, then three. With regular exercise, the body adapts, becoming fitter and more efficient. The heart can pump more blood, delivering more oxygen to the muscles. The muscles get stronger, and so on.

There are individual differences in the ability to adapt to exercise. Some sedentary individuals who take up jogging will be able to run three miles after a short training period, while others will take much longer to get to the same level. What accounts for this difference in a person's ability to adapt to exercise? One important factor is our genes.

Research into the role genes play in exercise has been gaining steam over the past few decades and is the topic of a symposium at the Experimental Biology conference in New Orleans on April 20. Mark Olfert of the University of California at San Diego and Claude Bouchard of the Pennington Biomedical Research Center have organized the symposium, the Genetics of the Adaptation to Exercise. The American Physiological Society is sponsoring the symposium.

Speakers at the symposium will include Eric Hoffman of the Children's National Medical Center, Washington, D.C. and Tuomo Rankinen of the Pennington Biomedical Research Center. Dr. Hoffman will discuss Genetics and skeletal muscle adaptation to exercise, while Dr. Rankinen will talk on Genetics and the response to exercise in human populations. The symposium will also include presentation of selected abstracts.

So far, scientists have identified about 200 genes that play a role in the body's ability to adapt to exercise. Although the research includes the term 'exercise' this work extends well beyond athletic performance. For example, it will lead to greater knowledge of how the muscles work, and to understanding muscle diseases such as muscular dystrophy.

Some of the research into the genetics of exercise has focused on individual genes. Dr. Olfert has looked at thrombospondin, a gene that limits the growth of small blood vessels, known as capillaries, in the muscles. Removing the gene allows greater capillary growth. The more capillaries in the muscle, the more oxygen the muscle will have available during exercise.

While this research is exciting, it has its limitations, Dr. Olfert said. Many genes play a role in exercise adaptation, most of these genes probably have a minor effect, and the way these genes work and interact with each other is quite complicated.

Dr. Bouchard has focused his research on gene patterns, using the power of computing to sift through thousands of genes. He has been involved with the Heritage Family Study, which began in 1992. In this program, family members undertake a standard exercise program while researchers measure changes in maximal oxygen uptake (a measure of aerobic fitness), blood pressure and glucose and insulin metabolism.

The researchers compared measures of adaptation to exercise on individuals within families and between families on a variety of measures, including maximum oxygen uptake. Because families share a similar genetic makeup, the research has helped uncover the role that genetics plays in exercise. For example, the researchers calculated that 25-50% of the variation in increase in maximum oxygen uptake was due to heredity.

They also found that one gene, the FHL-1 gene, played an important role in determining an individual's insulin sensitivity and glucose disposal ability in response to exercise. This gene, like other genes, comes in different variants. Individuals with one variant of this gene improved their insulin sensitivity and glucose disposal ability with exercise while people with another variant did not. This helps explain why some people who exercise are better at improving their glycemic level in the blood and avoiding diabetes, Dr. Bouchard said.

Editor's Notes: To arrange an interview with Dr. Olfert or Dr. Bouchard, please contact Christine Guilfoy at cguilfoy@the-aps.org or (301) 634-7253.

A fuller audio interview with them is available in Episode 19 of the APS podcast, Life Lines, at http://media.libsyn.com/media/lifelines/Episode_19__The_Genetics_of_Exercise.mp3

More information on the symposium is available at: http://www.the-aps.org/meetings/eb09/abs/eep-bouchard.htm.

Physiology is the study of how molecules, cells, tissues and organs function to create health or disease. The American Physiological Society (APS) has been an integral part of this scientific discovery process since it was established in 1887.