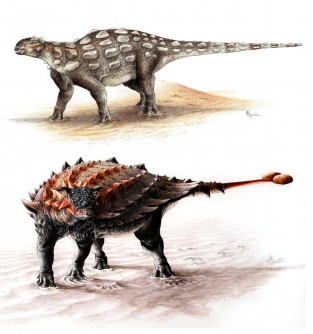 Gobisaurus compared with Ziapelta, an ankylosaur with a fully developed tail club. 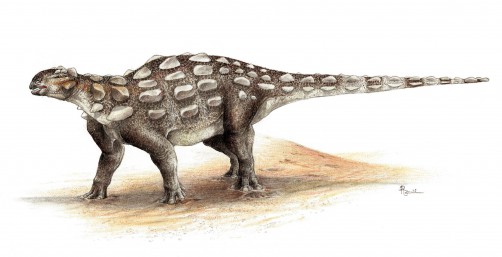 Life illustration of Gobisaurus, an ankylosaur with a stiff tail but no knob of bone at the end.

HNewswise — ow did the ankylosaur get its tail club? According to research from North Carolina State University and the North Carolina Museum of Natural Sciences that traces the evolution of the ankylosaur’s distinctive tail, the handle arrived first on the scene, and the knot at the end of the tail followed.

Victoria Arbour, a postdoctoral researcher at NC State and the North Carolina Museum of Natural Sciences, was a Ph.D. candidate at the University of Alberta when she began studying how the ankylosaur developed its unique tail. In a paper published in the Journal of Anatomy, Arbour compared Jurassic ankylosaur specimens to those from the early and late Cretaceous period, tracing the tail’s evolution from flexible to fearsome.

An ankylosaur’s tail is composed of a handle and a knob. The knob is made up of osteoderms, a special kind of bone formed in the skin that’s unique to armored dinosaurs. The handle is the lower portion of the tail which supports the knob.

“In order for an ankylosaur to be able to support the weight of a knob and swing it effectively, the tail needs to be stiff, like an ax handle,” says Arbour. “For that to occur, the vertebrae along the tail had to become less flexible, otherwise the momentum generated by the knob’s weight could tear muscle or dislocate vertebrae.”

By comparing the tails of the specimens, Arbour saw that by the early Cretaceous, ankylosaurs had begun to develop stiff tails with fused vertebrae. The knob appeared in the late Cretaceous.

“While it’s possible that some of the species could still have developed the handle and knob in tandem, it seems most likely that the tail stiffened prior to the growth of the osteoderm knob, in order to maximize the tail’s effectiveness as a weapon,” Arbour says.

Philip Currie, professor and research chair in dinosaur paleobiology at the University of Alberta, Canada, contributed to the work. The research was funded by the National Sciences and Engineering Research Council, the Killam Trusts, and the Dinosaur Research Institute.

Abstract: Ankylosaurid ankylosaurs were quadrupedal, herbivorous dinosaurs with abundant dermal ossifications. They are best known for their distinctive tail club composed of stiff, interlocking vertebrae (the handle) and large, bulbous osteoderms (the knob), which may have been used as a weapon. However, tail clubs appear relatively late in the evolution of ankylosaurids, and seemed to have been present only in a derived clade of ankylosaurids during the last 20 million years of the Mesozoic Era. New evidence from mid Cretaceous fossils from China suggests that the evolution of the tail club occurred at least 40 million years earlier, and in a stepwise manner, with early ankylosaurids evolving handle-like vertebrae before the distal osteoderms enlarged and coossified to form a knob. 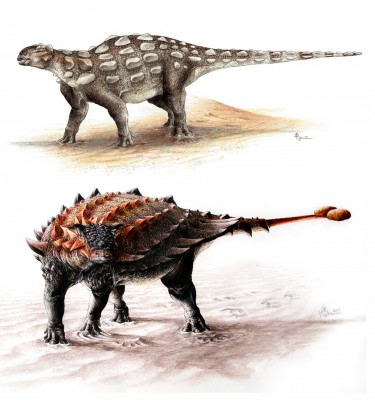 Caption: Gobisaurus compared with Ziapelta, an ankylosaur with a fully developed tail club. 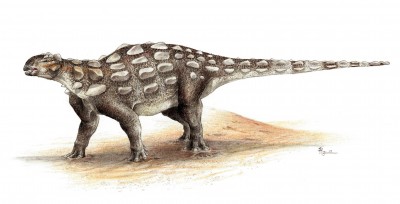 Caption: Life illustration of Gobisaurus, an ankylosaur with a stiff tail but no knob of bone at the end.