Dr. Tak Mak describes how he and his team at the Princess Margaret have demonstrated that immune cells make brain chemicals to fight off infections. 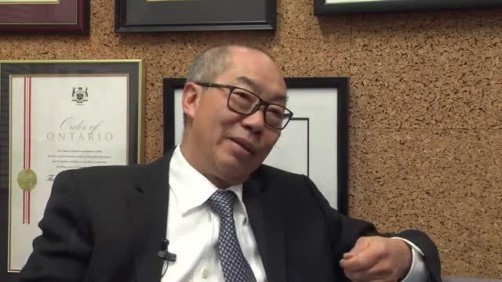 Dr. Tak Mak in his laboratory.

The first proof-of-function findings, published online today in the journal Science, solve a puzzle scientists have pondered for more than a century, says principal investigator Dr. Mak, Director of The Campbell Family Institute for Breast Cancer Research at the Princess Margaret Cancer Centre, University Health Network. He is also a Professor in the Departments of Medical Biophysics and Immunology at the University of Toronto, and a Full Professor in the Pathology Department at the University of Hong Kong.

During infection, T-cells of the immune system synthesize acetylcholine, explains Dr. Mak. In the brain, acetylcholine functions as a neurotransmitter and controls learning and memory. In the immune system, T-cells making this classical brain chemical are able to jump out of the blood circulation and take action in the tissues to fight infection.

First author Maureen Cox summarizes the study findings this way: “The neurotransmitter acetylcholine is produced by T-cells during viral infection to facilitate their entry into tissues under attack, where these cells then kill the virus-infected cells.”

The discovery was made when the lab team genetically engineered a mouse lacking the ability to produce the neurotransmitter in T-cells and observed that the immune cells could not control chronic virus infections in its absence.

“We now have absolute genetic proof that immune cells need this brain chemical,” says Dr. Mak. “We believe it’s an entirely new lens though which to look at numerous diseases including cancer, viral infections and autoimmune conditions.”

With respect to cancers, a tumour is often surrounded by immune cells that can’t break through its defences, perhaps because the immune cells are not producing sufficient amounts of acetylcholine. In this case, strategies to increase immune neurotransmitter production may be beneficial. The flip side is at play in autoimmune diseases such as rheumatoid arthritis or multiple sclerosis, where the autoimmune T-cells attack self tissues. In this case, a reduction in neurotransmitter signaling may quell the hordes of immune cells invading joints or the central nervous system.

The research builds on the findings of a 2011 study also published in Science in which Dr. Mak participated. That study demonstrated for the first time that immune cells can make acetylcholine (https://www.ncbi.nlm.nih.gov/pubmed/?term=21921156).

Dr. Mak says the next research goal is to identify and target the key receptors that facilitate the signalling crosstalk between immune cells and diseased organs.

The research was funded by a grant from the Canadian Institutes of Health Research to Dr. Mak, a Cancer Research Institute Irvington Postdoctoral Fellowship to Dr. Cox, and by The Princess Margaret Cancer Foundation.