Take More Breaks to Avoid Back Injury at Work 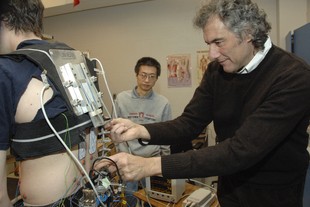 Researchers in Ohio State University 's Biodynamics Laboratory demonstrate the equipment they used in a study of lifting and muscle oxygenation. [From left: Lee Mazurek (wearing equipment), a masters student; Gang Yang, a doctoral student; and William Marras, a professor; all of industrial, welding and systems engineering.] 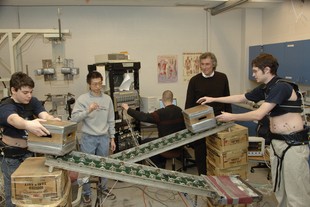 Newswise — Workers who lift for a living need to take longer or more frequent breaks than they now do to avoid back injury, according to a new study at Ohio State University.

The study also suggests that people who are new on the job need to take breaks even more often than experienced workers, and that the risk of injury is higher at the end of a work shift.

People who participated in the study lifted boxes onto conveyor belts for eight hours, while researchers measured the amount of oxygen that was reaching the muscles in their lower back.

The oxygen level indicated how hard the muscles were working, and whether they were becoming fatigued, explained William Marras, professor of industrial welding and systems engineering at Ohio State. His research and others' has shown that muscle fatigue is linked to back injury.

The study, which appeared in a recent issue of the journal Clinical Biomechanics, is the first to examine what happens to muscle oxygenation over a full workday.

Despite the fact that the study participants were performing the same job at the same pace all day, their back muscles needed more oxygen as the day went on. Taking a half-hour lunch break helped their muscles recover from the morning's exertion, but once they started working again, their oxygen needs rose steeply and kept climbing throughout the afternoon.

"That was alarming to us, because it means that their muscles were becoming fatigued much faster during the afternoon, and we know that fatigue increases the risk of back injury," Marras said.

Two 15-minute breaks, one mid-morning and the other mid-afternoon, helped muscles recover a little, but not as much as the half-hour lunch.

"This tells us two things," Marras said. "First, rest is good -- a half-hour break does a good job of helping muscles recover. But it also tells us that people are especially at risk for back injury at the end of the day, and the only way to counteract that effect is with more breaks as the day goes on."

Ten people participated in the study, six of whom had at least one year's experience in a job that requires lifting, such as stocking store shelves. The other four were considered novice lifters.

One person would lift a box from a waist-high stand and set it on a chest-high conveyor belt in Marras' lab, which simulates a typical shipping center. The box then traveled down the belt to the other person, who would lift it and set it on another conveyor belt. They lifted boxes of three different weights -- two pounds, 11 pounds, and 26 pounds -- and they worked for the entire eight hours, except for the half-hour lunch break and the two 15-minute breaks.

Each person wore a Lumbar Motion Monitor, a device that Marras designed to measure the movement of the spine. They also wore oximeters on their lower back -- devices that measured the oxygen level of their muscles through the skin. Just like the pulse oximeters that doctors clip to a patient's finger, these sensors use an LED light to detect the flush of color to the skin when blood carries oxygen to the tissues underneath.

Study coauthor Gang Yang, a medical doctor who is now earning a doctoral degree in biomechanics at Ohio State, said that the researchers' top priority was making sure the subjects didn't grow fatigued enough to become injured during the study. The heaviest box they had to lift, 26 pounds, weighed less than half as much as the loads that some workers are routinely required to lift in industry.

In Clinical Biomechanics, the researchers detailed the oxygen levels in the muscles of the typical study participant. During the first two hours of lifting, the oxygenation level gradually increased until it reached 11 percent above resting level. During hours two to four, it rose to 13 percent. It returned to resting level during lunch, but immediately rose 11 percent as the people started lifting again during hours four to six. During the last two hours of the day, oxygenation rose to its highest level -- 16 percent above resting level.

"Because the oxygen demand at the end of the day was so much higher, that's when we'd expect people to get hurt on the job," Marras said. "And the data I see coming out of industry bear that out -- people tend to hurt their back toward the end of a shift."

Meanwhile, data from the Lumbar Motion Monitor showed that the participants used their muscles differently as they became fatigued -- a finding that meshes with Marras' previous work. He's found that when people's back muscles begin to hurt, they tense up, and try to lift with other muscles that don't hurt as much.

"Now because of this study, we have a clinical reason for why that's happening. It's because the muscles are becoming fatigued, because they have such a high demand for oxygen," Marras said.

Tensing muscles prevents proper blood flow, so the muscles are even further deprived of oxygen. And using different muscles to lift may lessen pain at first, but it increases the stress on the joints and the spine, and increases risk of serious injury in the long run.

"When that happens, it's like the muscles fight each other," Marras said. "You have back muscles that fight the abdominal muscles, and when they both contract, it's like a seesaw effect, except you're pulling down on both ends, and your spine is in the middle."

The researchers found that participants who had never lifted for a living let their muscles tense up during the study. Their muscles also needed more oxygen than the experienced lifters, who generally relaxed their muscles and used the proper muscles for lifting.

"The bottom line is that it's much more costly from a physiological standpoint for novices to do the same work as experienced people," Marras said.

Low back pain is the most common and most costly musculoskeletal disorder in the American workplace. According to the U.S. Bureau of Labor Statistics, in 2002 there were more than 345,000 back injuries requiring time away from work. A 2004 study by Harvard Medical School and Massachusetts General Hospital found that back pain results in over 100 million lost work days per year. And a Duke University Medical Center Study found that in 1998, total health care expenditures incurred by people with back pain in the United States reached $90.7 billion.

Taking half-hour breaks instead of the standard 15 minutes might help reduce back injury, Marras said, although he acknowledged that such long breaks might not be practical in industry. He pointed to other studies, however, which showed that shorter breaks, taken more frequently, have a similar positive effect.

Marras and Yang's coauthors on the study included former graduate students Anne-Marie Chany, now at Columbus Children's Hospital, and Julia Parakkat, now at Wright-Patterson Air Force Base; and Deborah Burr, associate professor of biostatistics at the University of Florida.

This study was funded by the National Institute for Occupational Safety and Health.