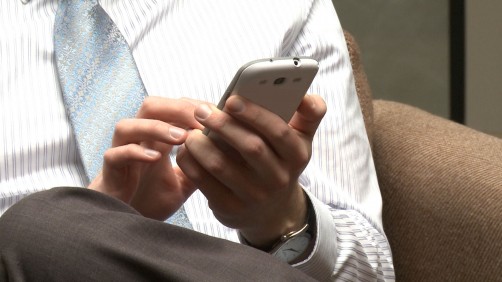 Newswise — MANHATTAN, KAN. — Want to be more productive and happier during the workday? Try taking a short break to text a friend, play "Angry Birds" or check Facebook on your smartphone, according to Kansas State University research.

In his latest research, Sooyeol Kim, doctoral student in psychological sciences, found that allowing employees to take smartphone microbreaks may be a benefit — rather than a disruption — for businesses. Microbreaks are nonworking-related behaviors during working hours.

Through a study of 72 full-time workers from various industries, Kim discovered that employees only spend an average of 22 minutes out of an eight-hour workday playing on their smartphones. He also found that employees who take smartphone breaks throughout the day are happier at the end of the workday.

"A smartphone microbreak can be beneficial for both the employee and the organization," Kim said. "For example, if I would play a game for an hour during my working hours, it would definitely hurt my work performance. But if I take short breaks of one or two minutes throughout the day, it could provide me with refreshment to do my job."

At the end of each workday, the participants recorded their perceived well-being.

"By interacting with friends or family members through a smartphone or by playing a short game, we found that employees can recover from some of their stress to refresh their minds and take a break," Kim said.

Taking a break throughout the workday is important because it is difficult — and nearly impossible — for an employee to concentrate for eight straight hours a day without a break, Kim said. Smartphone microbreaks are similar to other microbreaks throughout the workday: chatting with coworkers, walking around the hallway or getting a cup of coffee. Such breaks are important because they can help employees cope with the demands of the workplace.

"These days, people struggle with a lot of different types of stressors, such as work demands, time scheduling, family issues or personal life issues," Kim said. "We need to understand how we can help people recover and cope with stressors. Smartphones might help and that is really important not only for individuals, but for an organization, too."

The smartphone research is part of Kim's overall research that focuses on workplace microbreaks. His adviser is YoungAh Park, assistant professor of psychological sciences. Kim presented the research at the 29th annual Society for Industrial and Organizational Psychology Conference in May.

In the Workplace Psychology and Psychiatry Featured: BizWire Featured: LifeWire