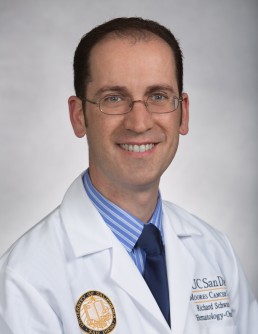 Males account for less than 1 percent of all breast cancer cases in the United States. In 2017, an estimated 2,470 American men will be diagnosed with the disease; 460 will die.

While rare among men, breast cancer symptoms, diagnosis and survival are similar for both genders. Men experience many of the same primary symptoms or signs of breast cancer: a lump or swelling in the chest area or new irregularities on the skin or nipples, such as redness, scaliness or puckering. Because male breasts generally have less tissue than female, it’s easier to detect lumps. However, some men with breast cancer never display obvious signs of the disease or fail to notice them.

“Both men and women benefit from being aware of their bodies and seeking care with their primary care providers for changes,” said Richard Schwab, MD, oncologist with Moores Cancer Center at UC San Diego Health.

The earlier breast cancer is detected, the better the chances of recovery and survival. In the earliest stages, the five-year survival rate (the percentage of people who live at least five years after diagnosis, excluding other causes of death) is 99 percent. If the cancer has spread to local lymph nodes, the 5-year survival rate drops to 85 percent. If the cancer metastasizes to more distant parts of the body, the rate falls to 27 percent.

As with women, men have a higher risk of developing cancer if they have a family history of breast disease or a mutation in a breast cancer risk gene, such as BRCA1 or BRCA2. In addition, age, high levels of radiation, elevated levels of estrogen (which can be caused by genetic conditions), other diseases, some kinds of medical treatment and lifestyle can increase a man’s risk of breast cancer.

Schwab is the medical oncology associate team leader for the Comprehensive Breast Health Center at Moores Cancer Center. He is available to discuss breast cancer occurrence among men.