As many as 1.4 million Americans suffer from uncomfortable abdominal cramping and diarrhea that come with ulcerative colitis and Crohn’s disease. These conditions, collectively known as inflammatory bowel disease (IBD), are associated with an imbalance among the thousands of species of “good” bacteria that inhabit the gut. University of Utah pathologists June Round, Ph.D., and Charisse Peterson discuss their research demonstrating that digestive health hinges on a conversation between good bacteria and the immune system that promotes a balanced community of good bacteria in the intestine. The study appears in Cell Host & Microbe on Jan. 22, 2015. 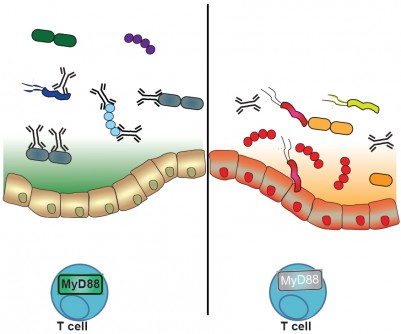 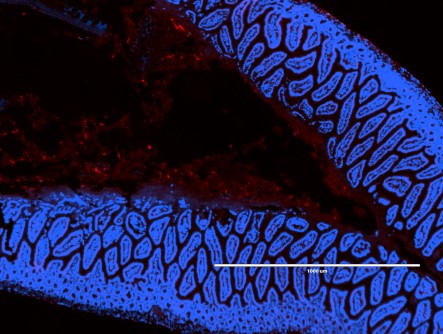 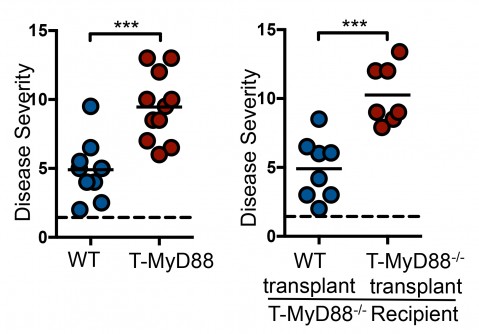 Newswise — As many as 1.4 million Americans suffer from uncomfortable abdominal cramping and diarrhea that come with ulcerative colitis and Crohn’s disease. These conditions, collectively known as inflammatory bowel disease (IBD), are associated with an imbalance among the thousands of species of “good” bacteria that inhabit the gut. A University of Utah study published on Jan. 22, 2015, in Cell Host and Microbe demonstrates that mice deficient for a component of the immune system, a protein called MyD88, have an imbalanced gut bacterial community – with some species dominating over others - and are more susceptible to contracting a severe IBD-like illness. Further, fecal transplants from healthy donors alleviate IBD symptoms in these mice.

The results show that the immune system encourages growth of a healthy community of “good” bacteria that is important for digestive health. This perspective on immune system function is in contrast to its best known role as the first line of defense in the fight against pathogens, including invasive bacteria.

“Our work highlights that the immune system shapes the composition of bacterial communities in the intestine,” says senior author June Round, Ph.D., assistant professor of pathology at the University of Utah School of Medicine. “This interaction is important because it’s becoming more and more clear that resident microbes are very important for our health.”

Considering that some people with IBD have mutations in genes that are part of a MyD88-controlled pathway, fecal transplantation - which involves collecting and processing stool from a healthy donor, and delivering it into the host’s gut - might help to ameliorate disease in these people, according to Round.

Loss of MyD88 disturbs the microbial community because it disrupts production of IgA. The antibody acts like a gatekeeper that controls which types of bacteria, and how many, are allowed to inhabit the gut. By performing inventories of total gut bacteria compared to species that bind IgA, the scientists determined that without MyD88, IgA failed to recognize species that it can otherwise.

The work not only demonstrates that a balanced microbial community promotes digestive health, but that it also shapes the host’s immune system. Mice raised in a sterile, germ-free environment have a faulty immune system, a defect that can be fixed if they are fed bacterial components, TLR2 agonists, that activates the immune system. The rescue does not work in mice deficient for MyD88, demonstrating again that the protein is key to interpreting communications between microbes and the immune system.

The dependency of host health on good bacteria has made the conversation a necessity. In response to demand, the immune system has adapted from a system designed to fight the body’s invaders to one that also fosters a harmonious relationship with the body’s peaceful inhabitants. 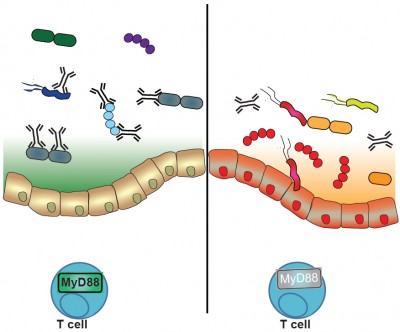 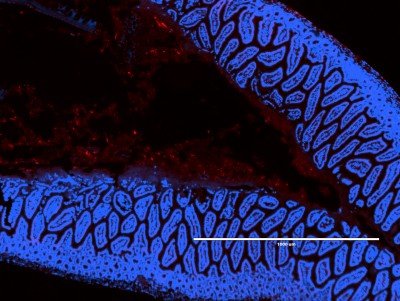 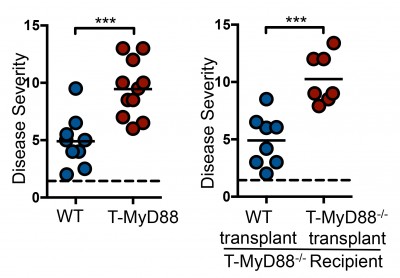