Pig–nosed turtles of Australia and New Guinea vocalize while feeding, basking, and nesting 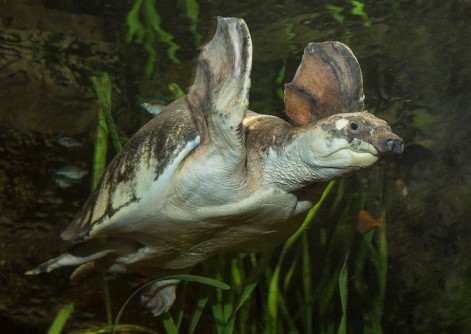 Newswise — NEW YORK (June 26, 2017) – Scientists from WCS and other groups have found that the pig-nosed turtle (Carettochelys insculpta) has joined a select group of chatty chelonians that can vocalize. The researchers recorded 182 simple calls from seven individuals in the wild and in a private breeding facility and found that the turtles communicate with each other while feeding, basking, and nesting.

The researchers published their study in the journal Copeia. Authors include Camila Ferrara, Aquatic Turtle Specialist for WCS; Richard Vogt of the Instituto Nacional de Pequisas da Amazônia; Carla Eisemberg of Charles Darwin University; and J. Sean Doody of the University of Tennessee.

Until recently, scientists believed that most freshwater turtles did not have complex social interactions or postnatal parental care.

The pig-nosed turtle, also called the Fly River turtle, is found in Australia, New Guinea, and Indonesia. It is classified as Vulnerable by IUCN due to the illegal wildlife trade and habitat loss.

Said WCS’s Camila Ferrara, lead author of the study: “Understanding how turtles communicate is important to help to protect them. Noise pollution produced by ships, boats, jet skis, and other motorized watercraft may affect the reception of sound by turtles and potentially interfere with their communication.”

In addition, Ferrara notes that current conservation strategies, which include isolating young individuals in captivity after hatching, might be negatively impacting important social interactions among females and hatchlings.

In 2014, WCS documented vocalization in giant South American river turtles In Brazil. Since the publication of those findings, managers now immediately release hatchlings instead of holding them for up to a month before releasing them into the wild as part of a head-starting program.

WCS’s Bronx Zoo has Fly River turtles on exhibit at JungleWorld, and an individual on exhibit at the World of Reptiles that has been at the zoo since 1958 – longer than any other animal.

WCS works to save turtles and tortoises around the world. In 2012, WCS launched an organization-wide program to revive some of the most endangered turtle and tortoise species. Efforts include breeding programs at WCS’s Bronx Zoo, head start programs abroad, and working with governments and communities to save species on the brink of extinction.