Taming Random Gene Changes As Our Bodies Start to Form

Goal is to Prevent Birth Defects or Cancers 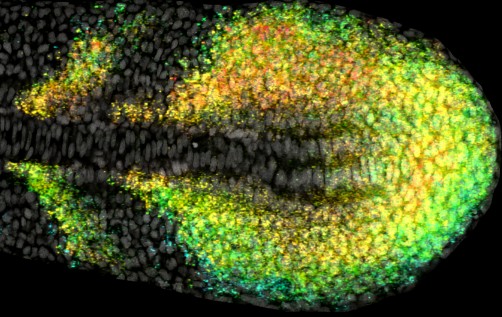 This image highlights single RNA molecules that scientists counted in single cells in a developing zebrafish embryo. Genes in the embryo’s segmentation clock oscillate, showing high and low expression along the axis of unsegmented tissues. RNA molecules are colored depending on their position in the tissues. The oscillations stop when groups of cells form segments. Cell nuclei are marked by the color gray. Scientists report in Cell Reports their research offer clues into how random gene fluctuations might be tamed during at the earliest stages of when life forms, which could one day help prevent birth defects or cancer.

Newswise — CINCINNATI – Scientists exploring how to tame random gene fluctuations as the embryos that become our bodies start to form have identified a control switch in the vertebrate segmentation clock of developing zebrafish. The researchers report in Cell Reports their findings could uncover methods for modulating genetic signals to prevent birth defects or cancers rooted at the earliest stages of development.

In this study, Ozbudak and colleague examined vertebrate development at a stage called somitogenesis—or when bilaterally paired blocks of cells called somites form along the front-to-rear-axis of the embryo. In vertebrates, somites become the deeper layers of skin, cartilage, skeletal muscle, etc.

The researchers counted single transcripts (or copies) of genes in the zebrafish segmentation clock. They showed that clock genes have very low amplitudes of RNA (ribonucleic acid). RNA carries genetic instructions that control proteins and tissue-forming cells. The authors demonstrate the random variables in genetic signals during somitogenesis aren’t controlled from inside the genes. Instead, they are driven by external sources of noise, such as the effects of metabolism, etc.

These externally driven fluctuations in gene signaling are suppressed by the Notch pathway of genes and proteins. Notch is known to act as a control switch between cell expansion and the transformation of cells into specific tissue types. The researchers demonstrate it also serves this role during zebrafish somitogenesis.

“Our results suggest variability in gene expression is controlled by a balance between time delays and when cells are actively signaling in vertebrate tissue,” says Ozbudak. “Further investigation should shed light on the accuracy of natural development clocks in animals and humans, and this could help inspire the development of robust synthetic oscillators that might help prevent certain birth defects or cancers.”

Looking to the Future

Although the potential of this research having a beneficial clinical impact remains years away, the work gives scientists new possibilities for exploring how life forms—and how this new knowledge could positively impact health, according to the researchers.

Take the possibility of trying to a prevent cancer. During embryonic development, Notch is busy working as an activator of genes in the Hes family, according to Ozbudak. Hes genes are known to vary their signaling during early development of the vertebral column, as well as in other tissues.

Dysregulated Hes genes are also highly expressed in several types of human cancer, including rhabdomyosarcoma, a cancer affecting the body’s connective tissues. The ability to oscillate and control gene expression at the earliest stages of development raises the question of whether it might be possible to stop early genetic programming as an embryo forms that might cause cancer years after a person’s birth.