7-Nov-2017 3:00 PM EST, by University of Alabama at Birmingham
favorite_border 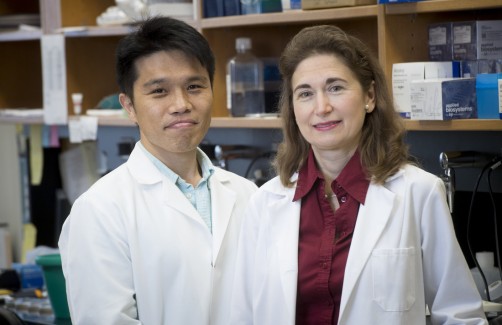 Newswise — BIRMINGHAM, Ala. – Over the past 15 years, University of Alabama at Birmingham endocrinologist Anath Shalev, M.D., has unraveled a crucial biological pathway that malfunctions in diabetes.

Her latest discovery in this beta-cell pathway, published in the journal Diabetes, shows the potential to enhance the effectiveness of existing diabetes drugs, as well as reduce some of the unwelcome side effects of those drugs.

The need for improved treatment is great. Diabetes is a disorder characterized by elevated blood sugar that afflicts one of every 10 U.S. adults and doubles the risk of early death. More than 30 million people in the United States have diabetes, which is the seventh-leading cause of death and also leads to blindness and lower-limb amputations.

In 2013, the UAB researchers found that either diabetes or elevated production of the protein TXNIP induced beta-cell expression of microRNA-204, or miR-204, and this microRNA, in turn, blocked insulin production. The Shalev group has now found another vital role for miR-204 — regulating the cell surface receptor that is the target of many of the newer type 2 diabetes drugs, such as Byetta, Victoza, Trulicity, Januvia, Onglyza and Tradjenta. This drug target is the glucagon-like peptide 1 receptor, or GLP1R. Activation of GLP1R with these drugs helps the beta cell produce and secrete more insulin.

Greater GLP1R expression is beneficial because it helps transfer a signal to the beta cell to secrete more insulin, such as after a meal. Also, many of the newer diabetes drugs act as agonists to activate GLP1R. Higher expression can allow use of a lower-drug dose to treat diabetes, thus reducing dose-dependent side effects.

In mice, the UAB researchers found that a deletion of miR-204 caused enhanced GLP1R expression, and also better insulin secretion and glucose control. Furthermore, the knockout mice were more responsive to a GLP1R agonist in glucose tolerance tests. When the GLP1R knockout mice were used in a model of diabetes, where beta cells are damaged by low doses of the toxin streptozotocin, the diabetic mice showed improved glucose control and increased serum insulin levels.

These results suggest that downregulating miR-204, now revealed as an upstream regulator of GLP1R, could lead to better treatment of diabetes.

One key fact about miR-204 may further aid improved treatment. This microRNA is highly expressed in beta cells, but it is not highly expressed in the rest of the pancreas or in cells of the gastrointestinal tract that also express GLP1R and therefore respond to GLP1R agonists. Thus, an inhibitor of miR-204 would be relatively selective for beta cells.

“This novel concept of inhibiting a microRNA in a non-targeted manner, but taking advantage of its restricted tissue distribution and thereby selectively upregulating its target genes in that tissue, may have far reaching implications for microRNA biology and tissue-specific gene targeting in general,” Shalev said.

“Since miR-204 is expressed primarily in pancreatic beta cells, manipulating its levels allows for preferential upregulation of GLP1R in the beta cell, where it helps secrete insulin, rather than in the gastrointestinal system, where it can cause nausea and impaired gastric emptying, or in the pancreas, where it can increase the risk for pancreatitis,” Shalev said. “So by inhibiting miR-204, one could increase the effects of GLP1R agonist drugs on insulin secretion, thereby lowering the necessary dose and avoiding some of the dose-dependent adverse effects.”

The mechanism by which miR-204 downregulates expression of GLP1R is binding of the microRNA to the 3-prime-untranslated region of GLP1R messenger RNA. Such binding is a known method to control gene expression by microRNAs. The UAB researchers discovered this specific binding using microRNA target prediction software. They found two binding sites for miR-204 in the messenger RNA for human GLP1R and one binding site in the messenger RNA for mouse GLP1R. When they mutated those binding sites, it eliminated the regulatory effect of miR-204.

Additionally, the Shalev group showed a novel link between TXNIP and GLP1R signaling. Mice with a beta cell-specific knockout of the protein TXNIP had lower miR-204 levels and higher GLP1R expression, and the mice showed enhanced insulin secretion and glucose control in response to an agonist of GLP1R. Thus, through both control of insulin production and regulation of GLP1R, as well as regulation of the unfolded protein response and beta cell apoptosis, miR-204 appears to play a linchpin role to control the function of beta cells in the pancreas.