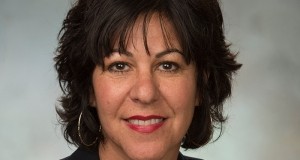 Newswise — Rebecca Tate, lecturer, Hospitality and Tourism Department, discovered her aptitude for the hotel industry while she was a Buffalo State student in the 1980s.

During her senior year as a business communication major—before the hospitality major existed—Tate landed an internship in the downtown Holiday Inn sales department. She was joined by other interns from other nearby colleges.

“It was January and the hotel had a two-week sales blitz. They sent us knocking on doors to drum up business,” she said. “At the end of the two weeks, I was the only student left. They hired me.”

That demonstration of fortitude was the beginning of a decade-long career working for hotel chains in Buffalo and Boston, Massachusetts.

“The beautiful thing about the hotel industry is that when you go to work, people are generally happy,” Tate said. “Customers are on vacation and relaxed. Even the business travelers are happy to have a little bit of luxury.”

Although she traded the hotel world for the classroom when she joined Buffalo State in 2001, Tate is once again working in a hotel brimming with life—Hotel Henry Urban Resort and Conference Center—as its faculty director.

The new hotel, which opened in May 2017 in the Richardson Olmsted Complex, is the training ground for students in Tate’s Industry Experience course. Beginning this fall, 10 upperclassmen admitted to the course are learning the four elements of the hotel business: marketing; conferences and events; food and beverage; and rooms division; through both classroom training and hands-on experiences. They will spend the next semester focusing on their favorite area, working in shifts under the tutelage of Hotel Henry principals Eugene and Diana Principe.

“Hotel Henry is so busy,” Tate said. “Students learn how to handle business meetings, social events, and weddings. They get to work in the hotel’s restaurant and attend to guests.”

Not only are they gaining valuable experience, students are also preparing for an industry that is booming. In May 2017, the leisure and hospitality industry had the highest job openings rate of any industry, according to the U.S. Bureau of Labor Statistics. Employment in this sector is projected to increase from 14.7 million jobs in 2014 to 15.7 million in 2024.

Tate attributes this trend to people traveling more frequently and hotels reflecting customer preferences by offering everything from boutique to extended-stay models.

And in a city like Buffalo that is on the upswing, new hotels are opening all the time.

“About 95 percent of our graduates find jobs in the field,” she said. “There is a high demand for our students, and starting salaries aren’t bad.”

But first students have to learn the ropes.

“I tell them that no day is the same. Be ready to work, be prepared to deal with disgruntled guests. Be flexible,” Tate said. “And above all, have a service attitude. What you’re selling is an experience.”

As much as she thrives in the classroom, Tate said she sometimes missed working in hotels. She’s thrilled to have the opportunity to return to a beautiful one.

“What I love about Hotel Henry is it’s gotten me back in the field while still teaching,” she said. “It’s wonderful to have this partnership.”

About Rebecca Tate
After earning a master’s degree in education from Niagara University, Tate joined the Buffalo State Hospitality and Tourism faculty in 2001 as the coordinator for the Statler Program for Career Development in Hotel Administration. She then became a lecturer and has served as interim chair and adviser to the Eta Sigma Delta International Honor Society. She developed the Cultural Tourism course and served on numerous campus committees. She received the 2017 President’s Award for Excellence in Service to the College. Her areas of expertise include strategic marketing and management issues in the hospitality and tourism industry, with an emphasis on the regional economic impact of tourism dollars.