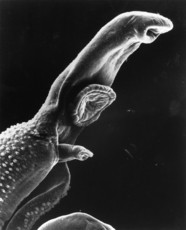 Newswise — An international team, including researchers at The University of Texas Health Science Center at San Antonio, has sequenced the genome of Schistosoma mansoni, a parasite that infects 200 million in 76 countries through freshwater snails. The research, said to be the largest genome sequencing of a parasite to date, is the cover article in the July 16 issue of Nature.

Knowing the organism's genetic codes will help researchers develop better medication for infections, a diagnostic field test and even a vaccine, said co-author Phil LoVerde, Ph.D., professor of biochemistry and pathology at the UT Health Science Center. He has studied the parasite, and its close relatives, for more than three decades.

S. mansoni, a neglected tropical disease, ranks with malaria and tuberculosis as a major cause of disease worldwide. "The reason we don't have this infection in the U.S. is we don't have the snails that carry the parasite," Dr. LoVerde said. "However, it is a disease of military importance. Our troops are in areas of the world where it is endemic, and they can become infected."

Other Americans at risk include those traveling in the Peace Corps, on business or for church missions. No vaccine exists, and only one medication, praziquantel, is available. "It is the only treatment asset we have, and there is evidence from the field and the lab that resistance to it can develop," Dr. LoVerde said.

Dr. LoVerde's group is trying to identify the genes responsible for drug resistance. Sequencing the genome "gets us a lot," he said. "It opens a new door for development of better control regimens."

Individuals in Africa contract the S. mansoni infection, known as schistosomiasis or "snail fever," by coming into contact with freshwater that contains the infected snails. Ten percent of infected persons develop an enlarged liver or spleen, as the body encapsulates S. mansoni eggs that have been deposited by the adult worms living in their victims' blood vessels. The disease is common among children who live in areas where the water is unsafe, sanitation is poor and basic health care is unavailable.

S. mansoni is classified as a helminth, a family of worms that includes roundworms, pinworms and tapeworms. S. mansoni male and female pairs produce 300 eggs a day, each of which can infect a freshwater snail that produces the infectious form of the parasite. When humans come into contact with freshwater that contains the infectious larvae, the larvae can burrow through unbroken skin and develop into an adult worm. The disease is caused by the egg stage.

S. mansoni is the first representative of the lophotrochozoa, a phylum of invertebrates, to have its genetic code cracked. Sequencing the flatworm's genome will not only contribute to understanding the biology of the parasite, Dr. LoVerde said, but will offer insights into adaptation of animals, especially the development of a body pattern with bilateral symmetry and the development of tissues into organs.

The worms, a centimeter in length, can live five to 10 years on average in humans. The longest-lived worms were found in unsuspecting hosts 40 years after infection, Dr. LoVerde said.

"Every day of their lives, people are exposed to S. mansoni in areas where it is endemic," he said. "Existing drugs don't prevent reinfection, so people have repeat cases. With the sequencing of this helminth's genome, we can develop better treatments at unprecedented speed."

Knowing the genetic sequence should make it possible to identify the genes that are responsible for the severity of infections, and why some people seem to develop immunity to repeat infections while others do not, Dr. LoVerde said.

Dr. LoVerde regularly travels to Africa, South America and other areas of the world to obtain snails and human blood and tissue samples. His lab developed, and is testing, vaccine candidates in a baboon model as a prelude to human clinical trials. The lab team is attempting to identify the signal that male worms send to females for development and reproduction. Females need a constant signal to maintain these processes.

The team also seeks to identify genes that enable the parasite to take advantage of human signals in order to develop.

The U.S. portion of the genome sequencing project was supported by the National Institute of Allergy and Infectious Diseases, the John E. Fogarty International Center for Advanced Study in the Health Sciences, the Burroughs Wellcome Fund and the Tropical Disease Research Program of the World Health Organization.

By taking advantage of the genome sequence information, Dr. LoVerde, in collaboration with Timothy J.C. Anderson, Ph.D., of the genetics department at the Southwest Foundation for Biomedical Research in San Antonio, and Charles D. Criscione, Ph.D., of the biology department at Texas A&M University, produced the first microsatellite-based genetic linkage map for S. mansoni, just published in BioMed Central's open access journal Genome Biology. This map represents another tool for researchers. Drs. Anderson and Criscione are not co-authors on the Nature article.

About the UT Health Science Center at San Antonio:

The University of Texas Health Science Center at San Antonio is the leading research institution in South Texas and one of the major health sciences universities in the world. With an operating budget of $668 million, the Health Science Center is the chief catalyst for the $16.3 billion biosciences and health care sector in San Antonio's economy. The Health Science Center has had an estimated $36 billion impact on the region since inception and has expanded to six campuses in San Antonio, Laredo, Harlingen and Edinburg. More than 26,400 graduates (physicians, dentists, nurses, scientists and other health professionals) serve in their fields, including many in Texas. Health Science Center faculty are international leaders in cancer, cardiovascular disease, diabetes, aging, stroke prevention, kidney disease, orthopaedics, research imaging, transplant surgery, psychiatry and clinical neurosciences, pain management, genetics, nursing, dentistry and many other fields. For more information, visit www.uthscsa.edu.