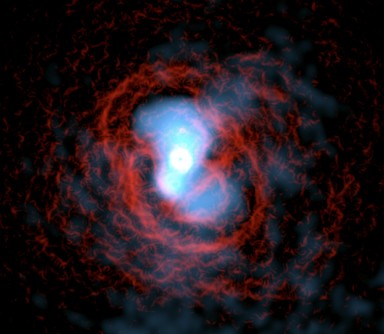 X-ray emission from the core of the Perseus cluster as observed by Chandra (in red), with the sharp edges enhanced by using a gradient filter; the radio emission from the central supermassive black hole is shown in blue. Image courtesy of NASA.

Newswise — International scientists have identified the dynamics of the core of one of the most massive objects in the known universe, bringing some insight into cosmology of clusters of galaxies.

The Hitomi collaboration, in which Lawrence Livermore National Laboratory scientist Greg Brown https://www.pls.llnl.gov/people/staff-bios/physics/brown-g is a member, found that the turbulent motion of the intracluster gas in the Perseus cluster (is only a small fraction of the mechanism responsible for heating the gas to it 50 MK temperature. The Perseus cluster is a cluster of galaxies in the constellation Perseus. It is one of the most massive objects in the known universe, containing thousands of galaxies immersed in a vast cloud of multimillion degree gas.

This finding, published in the July 6 edition of Nature http://www.nature.com/nature/journal/v535/n7610/full/nature18627.html, demonstrates that it is possible to infer an accurate mass of a cluster almost exclusively from its thermal hydrostatic pressure without having to rely on low accuracy measurements and estimates of the turbulent pressure of the system. Accurate cluster masses provide strong constraints on cluster cosmology and dark matter.

This recent discovery is the result of measurements using the Soft X-ray Spectrometer (SXS) calorimeter flown on the Hitomi X-ray Observatory and designed and built at the NASA/Goddard Space Flight Center. The high energy resolution of the SXS made it possible, for the first time, to measure a high resolution, high throughput spectrum of a cluster of galaxies. Generally, high resolution measurements such as these are limited to only point sources, not objects as large as clusters of galaxies. The line-of-sight velocity dispersion of the Perseus cluster was measured to be 164±10 km/s, and from this dispersion the turbulent pressure was found to be only about 4 percent of the thermodynamic pressure.

“From these measurements we infer that a total cluster mass determined from hydrostatic equilibrium in a central region requires little correction for turbulent pressure,” Brown said. “The high resolution of the SXS in the iron K energy band will revolutionize our view of some of the largest, most energetic objects in the universe.”

The energy scale of the SXS was calibrated after Hitomi’s launch, i.e. in flight, using combined data from ground calibration at NASA’s Goddard Space Flight Center and measurements conducted at LLNL’s electron beam ion trap (EBIT) facility. The measurements at EBIT were completed using a laboratory version of the SXS, also designed and built at NASA/Goddard Space Flight Center.

“The EBIT measurements were critical for calibrating our energy scale for the Perseus measurements.” said NASA’s F. Scott Porter, one of the system leads for the SXS and the instrument lead for the calorimeter at LLNL’s Electron Beam Ion Trap (EBIT). https://www-pls.llnl.gov/?url=about_pls-physics_division-hed_physics-ebit

In addition to contributing to the energy scale, high accuracy laboratory measurements led by LLNL’s Peter Beiersdorfer also are crucial for interpreting the spectrum from the Perseus cluster. Brown also participated in the ground calibration of the SXS.

Unfortunately, the JAXA Hitomi X-ray Observatory, which was launched on Feb. 12, 2016 from Tanegashima, Japan, met with an untimely, tragic end just weeks after launch when a supposed software anomaly sent it spinning out of control – the satellite was unrecoverable.

“Satellite projects are challenging, and, sometimes pretty unforgiving. It’s extremely sad, and a great loss to the community. But, we did get one really great result demonstrating how important these measurements are for our understanding of the universe, and we are all anxiously awaiting the next mission that will carry a calorimeter,” Brown said.