Teasing Out the Microbiome of the Kansas Prairie 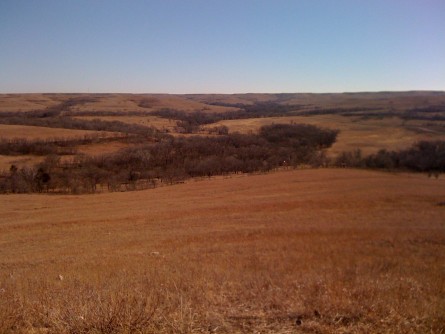 Newswise — The Kansas prairie seems like the very picture of beauty and simplicity, with undulating fields of corn and wheat stretching as far as the eye can see.

But below ground, the soil bears witness to the incredible diversity and chaos of life within even the smallest patch of ground. Just a teaspoonful of Kansas soil contains tens of thousands of microbial species.

Now scientists at the Pacific Northwest National Laboratory have untangled that Kansas-based mess of microbes more fully than scientists have ever done for a sample of soil.

In one of the most in-depth looks to date at a soil metagenome – all the genetic material recovered from a sample of soil – the team reconstructed portions of the genomes of 129 species of microbes. While it’s only a tiny proportion of the estimated 100,000 species in the sample, it’s a leap forward for scientists who have had only a fraction of that success to date.

The results include the first reconstruction of the complete genome of a single microbe ever from a complex soil sample. Other groups have reconstructed full genomes of microbes out of less complex environments, including mines, microbial mats, and the human microbiome.

The results were published recently in mSystems, a publication of the American Society for Microbiology.

Soil microbes: Crucial for climate, environmentMicrobes in soil determine in large part how the planet stores carbon, when and how carbon is released into the environment, how plants take up nutrients and how crops fare. While many people have become familiar with the community of microbes that live on us, with us, and within us – the human microbiome – the soil microbiome is lesser known but crucial for the fate of our planet. More knowledge about microbes helps scientists understand climate change and the forces that shape the health of our planet.

While scientists have made strides sorting out which species are present in complex soil samples, how those species interact remains a hugely daunting problem.

“We’re trying to sort out the broad questions. What are the various microbes in the microbial community doing? Which species are very active and which seem dormant? How do they all fit together?” said microbiologist Janet Jansson, the corresponding author.

“Today we’re able to compile immense data about microbial communities very quickly, but it’s very difficult to put the information together to create a coherent picture,” she added.

Jansson turned to post-doctoral associate Richard Allen White III, the first author of the paper, to take on the challenge of disentangling the genomes.

Digging up the dirt on the Kansas prairieThe team started with data culled from a sample of uncultivated, native Kansas prairie collected at the Konza Prairie Biological Station in northeastern Kansas. Scientists compiled the genetic data previously through the Great Prairie Soil Metagenome Grand Challenge Initiative at the Joint Genome Institute, a DOE Office of Science User Facility.

The Kansas soil is from the Great Plains, where soil has high carbon content compared to other soils. Scientists like Jansson are exploring what will happen in the soil as the climate changes. For example, there could be greater release of greenhouse gases to the atmosphere if microorganisms convert carbon to carbon dioxide more rapidly.

The sample under scrutiny included more than 250 billion base pairs of genetic data, mostly of microbes, which awaited a scientific team with the chutzpah to try to make sense of it. Jansson’s team took on the challenge, unraveling an amount of information approximately equal to all the data streaming through 200 cell phones in a month.

The genetic material didn’t come neatly packaged. It had been torn, split, twisted, crushed and exposed to all manner of disrespect.

“Imagine taking a thick book written in hundreds of different languages, chopping the book up into pieces the size of grains of rice, and then having to put it back together again,” said White. “That’s not unlike the challenge we face when we try to understand what’s going on in even a handful of soil.”

Jansson considers untangling the microbes in soil especially challenging because there is a huge diversity. Scientists estimate 50 to 100 times as many microbial species inhabit a typical soil sample than the human gut. Also, most microbes from soil have never been grown in a laboratory where they could be studied thoroughly.

Knitting soil DNA togetherScientists use multiple techniques to knit together strings of DNA accurately. The techniques are generally a combination of sophisticated chemistry methods and software algorithms designed to make sense of genetic material. A key to the team’s success was the use of powerful supercomputers at PNNL and EMSL, the Environmental Molecular Sciences Laboratory. EMSL is a DOE Office of Science User Facility on the PNNL campus.

To do the study, White used a sequencing technology originally developed in the laboratory of his former adviser, Stephen Quake of Stanford. Scientists use the genome analysis tool to break DNA down into smaller pieces, then sequence those and assemble those into longer pieces.

When the team combined the technology with other methods, they ended up with 10,000 pieces of DNA, each longer than 10 kilobase pairs – longer than 10,000 pairs of the biological compounds that make up DNA. Other attempts at cracking a soil metagenome have yielded much lower numbers, for instance, just 9 pieces of DNA of that length – less than one-thousandth of what the team achieved.

“Soil is one of the most complex and diverse ecosystems on the planet. It’s a complex three-dimensional substrate; there’s nothing else quite like it,” said White.

“We’re at the point where we’ve put together a few long sentences of a very large book,” he added. “We’ve gone from having a few words or parts of words to having a few sentences. But we’ve got a long ways to go. We are in our baby steps of identifying who’s in there and what they’re doing.”

The work was funded by the laboratory’s Microbiomes in Transition (MinT) Initiative, which is headed by Jansson, who is the president of the International Society of Microbial Ecology and helped create the National Microbiome Initiative.