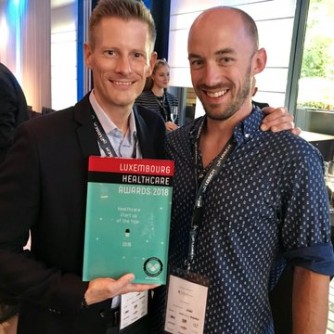 Newswise — OREM, Utah--Techcyte Europe has been awarded the 2018 Healthcare Startup of the Year at the annual Healthcare Summit in Luxembourg.

Launched in 2014, the Healthcare Summit gathers together professionals from the health, care, and life science sectors. The event also awards the best practices available to the industry, as well as the teams who have made significant contributions to its evolution. The Healthcare Startup of the Year award looks for companies less than five years old with less than 20 employees who exhibit exceptional dynamics, innovation and future growth potential.

“We’re very grateful for this award, as it solidifies our ambition to make a meaningful impact not only in Luxembourg and Europe, but on healthcare in general,” said Troy Bankhead, Director European Operations. “With artificial intelligence as the engine behind so many pioneering advances, we’re confident in the future of our technology and are happy to be able to see it come to fruition.”

Techcyte is a deep learning software platform that uses image analysis to assist lab techs and pathologists. The technology is revolutionary because it helps labs become profitable and return quicker, more accurate results to patients.

“Luxembourg’s contribution to Techcyte’s growth is exciting, as we gain not only a valuable presence in Europe, but in the added resources to scale the company and grow Techcyte throughout the world,” said Ben Cahoon, COO of Techcyte.

Techcyte is currently working with Luxembourg’s prominent laboratories on various projects. In some instances, labs will become R&D partners, and in other cases, they will use the Techcyte deep-learning image analysis platform to lower their costs and increase their lab’s efficiency.

Techcyte, Inc. is based out of Orem, Utah. Started in 2013, Techcyte has offices in the U.S., Mexico and Luxembourg. Techcyte was founded in 2013 as a tech transfer from the University of Utah with a mission to lower healthcare costs through artificial intelligence. Techcyte uses the power of deep machine learning to perform image analysis of whole slide images. Deep learning-based image analysis is the key technology needed for widespread adoption of digital pathology in research, pharma, human, environmental and veterinary diagnostic testing.