Technique Can Label Many Specific DNAs, RNAs, or Proteins in a Single Tissue Sample

Researchers at Harvard’s Wyss Institute developed a method to multiplex imaging of specific and rare molecules in samples, which offers the potential to advance basic biology, biomarker discovery, and clinical diagnostics. 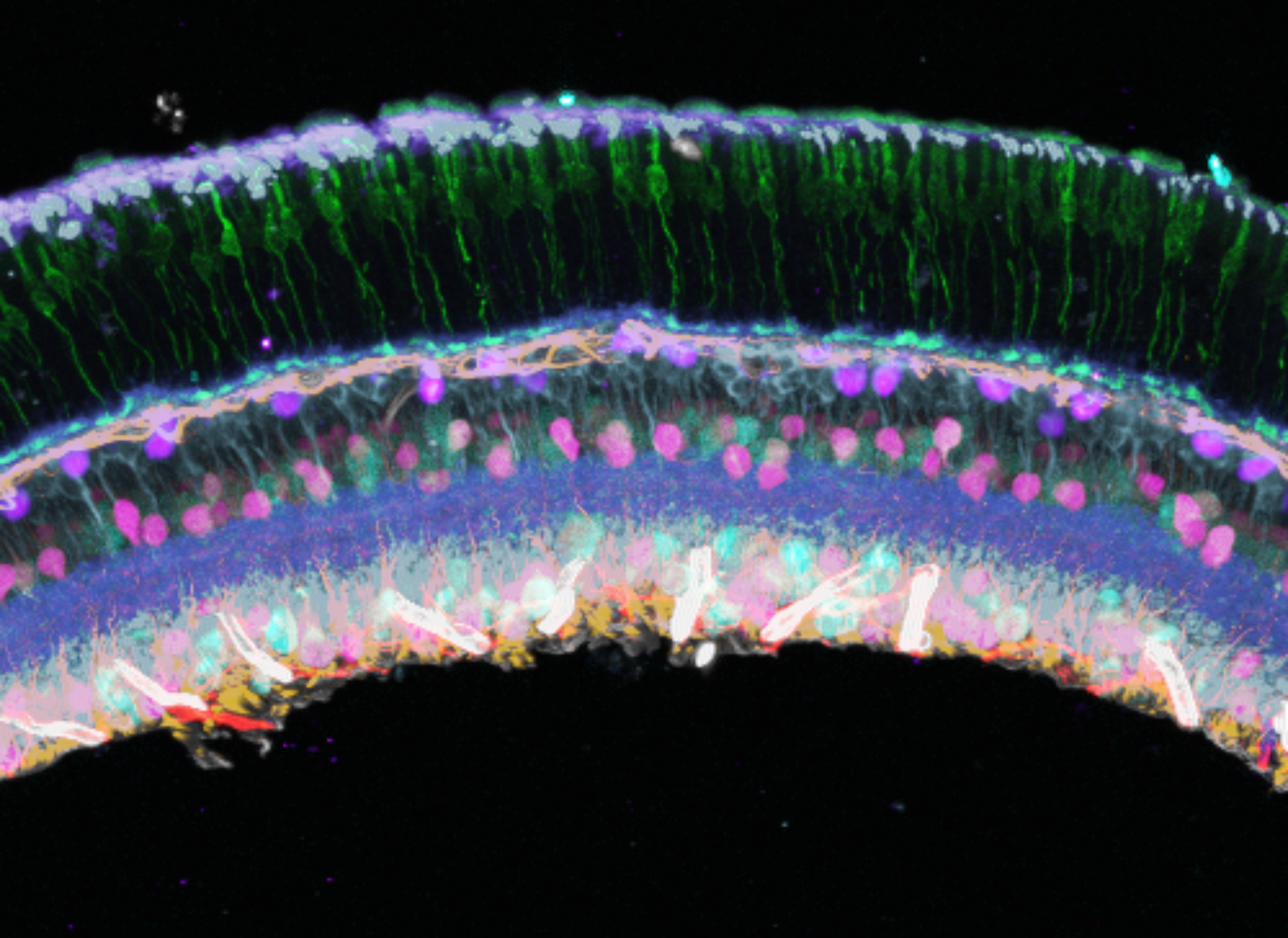 Immuno-SABER labels 10 different protein markers in this section of a mouse retina.

Newswise — SAN DIEGO, CA – A new technique can label diverse molecules and amplify the signal to help researchers spot those that are especially rare. Called SABER (signal amplification by exchange reaction), Peng Yin’s lab at Harvard’s Wyss Institute first introduced this method last year and since have found ways to apply it to proteins, DNA and RNA. Yin will explain how engineered DNA nanotechnology, including SABER, can help scientists analyze the molecular landscape on Tuesday, February 18 at the 64th Annual Meeting of the Biophysical Society in San Diego, California.

To understand how our bodies function normally or during disease at the cellular and molecular levels, being able to visualize a range of molecules is essential. There are currently methods to do this, but each has its limitations. It is especially difficult to see low-abundance molecules, which give a weak or non-detectable signal when a single fluorescent probe attaches. It is also challenging to see many molecules simultaneously or look for infrequent molecules in large and complex tissue samples, like tumor biopsies. These limitations inspired Peng Yin to design and develop new nanotechnologies.

SABER is a nanotechnology employing customized DNA templates that can attach to molecules of interest. Each DNA template also has targets for adding fluorescent probes, which can be designed to have a branching pattern to accommodate more fluorescent probes, thereby making it easier to detect rare molecules. In the first demonstration of SABER technology, Yin and colleagues targeted DNA and RNA sequences in mouse retina and also visualized 17 different target regions simultaneously on the human X-chromosome. This is a significant improvement over the conventional method, known as FISH (fluorescence in situ hybridization), which had a hard time detecting rare sequences, especially in thick tissue, and was limited to one fluorescent probe.

To use SABER to detect proteins, Yin and colleagues attached short DNA handles to antibodies. The antibodies bind specifically to proteins, then the SABER process can add DNA sequences in a branching pattern to add fluorescent molecules. They named the technique immuno-SABER. Unlike standard immuno-florescence, in which only five proteins can typically be labelled in the same sample, by coupling immuno-SABER to a DNA exchange method, they labeled ten proteins in the same retina sample.

Because of its speed, low cost, and ability to detect many low-abundance molecules in the same sample, SABER offers the possibility of high-throughput screening, which could advance basic biology, biomarker discovery, and clinical diagnostics, Yin says. And someday, says Yin, “SABER could be useful for matching patients with optimal treatments based on the spatial pattern of protein markers. For example, for cancer, the tumor microenvironment can be characterized by the spatial expression pattern of the protein markers, which could inform immunotherapy treatment.”