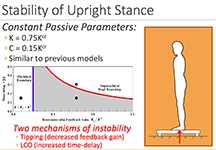 This graphic relates some of the science behind a new technique that measures subtle oscillations in a person's posture while they stand on a "force platform." The approach might be used to diagnose neuromuscular disorders such as multiple sclerosis or impairment from concussions.

Newswise — WEST LAFAYETTE, Ind. – A new technique might be used to diagnose neuromuscular disorders such as multiple sclerosis or impairment from concussions by detecting and measuring subtle oscillations in a person's standing posture.

The approach detects and measures "limit cycle oscillations," or the tendency of a system to become unstable despite corrective efforts. In human standing posture, these LCOs are manifested by a person swaying because of excessive time-delay in neuromuscular response, which indicates impairment, said Arvind Raman, Robert V. Adams Professor of Mechanical Engineering and by courtesy a professor of materials engineering.

"The clinical application is especially promising as the assessment takes less than five minutes, requires standard balance equipment and does not require a medical doctor to perform," he said.

The Purdue researchers collaborated with Michael Cinelli, an associate professor at Wilfrid Laurier University in Canada, to study multiple sclerosis patients and athletes who had recently suffered a concussion. Research subjects were monitored as they stood on a "force platform" that records a shifting center of pressure.

"The multiple sclerosis patients had mild symptoms, and yet we were able to measure a significant difference compared to healthy controls," said James R. Chagdes, an assistant professor in the Department of Mechanical and Manufacturing Engineering at Miami University and lead author of a paper about the research published online on March 24 in the Journal of Biomechanics.

The technique, which might be used to diagnose and assess the severity of concussions, makes it possible to separate the LCOs from a person's natural postural sway.

"Even if you are trying to stand still there is some fluctuation, a random component of postural sway that all people have," said Shirley Rietdyk, a professor in the Department of Health and Kinesiology in Purdue's College of Health and Human Sciences. "We have figured out how to robustly detect the limit cycle oscillations even though we've got this natural random fluctuation also going on."

"LCOs are not only key to understanding postural instability, but also may have important implications for the detection of neuromuscular deficiencies," said Chagdes, a former Purdue doctoral student.

The paper was authored by Chagdes; Rietdyk; associate professor Jeffrey M. Haddad and professor Howard N. Zelaznik, both in Purdue's Department of Health and Kinesiology; Cinelli and students Luke T. Denomme and Kaley C. Powers in the Department of Kinesiology & Physical Education at Wilfrid Laurier; and Raman.

"The absence of LCOs in older adults affirms that dynamic instability in quiet stance arises specifically due to chronic or acute neurological deficit and not simply due to aging," Haddad said.

The LCO measurement can be used not only for detecting neuromuscular impairment but also might facilitate diagnosis and treatment of specific disorders and used to assess the effectiveness of treatment.

In future research, a new robotic platform will be used in attempts to increase the sensitivity of the method and determine the extent of the disease or condition causing the LCOs. The technique could become a prognostic tool, providing information about how far along a disease or condition is.

The research was funded by the National Science Foundation (grant CMMI-1300632) and is part of a Pillars of Excellence in the Life Sciences Initiative aimed at enhancing Purdue's life sciences research and graduate education. The investment will result in cohesive efforts across several colleges and is designed to produce preeminent contributions in the areas of integrative neurosciences and inflammation and immunology and infectious diseases.

b Department of Health and Kinesiology, Purdue University

Limit cycle oscillations (LCOs) are a hallmark of dynamic instability in time-delayed and nonlinear systems such as climate change models, biological oscillators, and robotics. Here we study the links between the human neuromuscular system and LCOs in standing posture. First, we demonstrate through a simple mathematical model that the observation of LCOs in posture is indicative of excessive neuromuscular time-delay. To test this hypothesis we study LCOs in the postural sway of individuals with multiple sclerosis and concussed athletes representing two different populations with chronically and acutely increased neuromuscular time-delays. Using a wavelet analysis method we demonstrate that 67% of individuals with multiple sclerosis and 44% of individuals with concussion exhibit intermittent LCOs; 8% of MS-controls, 0% of older adults, and 0% of concussion-controls displayed LCOs. Thus, LCOs are not only key to understanding postural instability but also may have important applications for the detection of neuromuscular deficiencies.