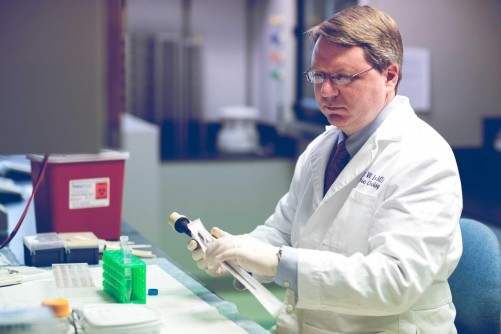 Daniel "Trey" Lee, MD, of the University of Virginia Children's Hospital, is testing an experimental gene therapy for a form of pediatric leukemia. Daniel "Trey" Lee, MD, of the University of Virginia Children's Hospital, is testing an experimental gene therapy for a form of pediatric leukemia.

Newswise — The University of Virginia School of Medicine has administered its first dose of an experimental immunotherapy for pediatric acute lymphoblastic leukemia that has resisted other forms of treatment.

The approach, known as chimeric antigen receptor (CAR) T-cell therapy, takes a person’s own immune cells and genetically modifies them with the goal of making them more effective cancer killers. In this case, pediatric oncologist Daniel “Trey” Lee, MD, of the UVA Children’s Hospital, the UVA Cancer Center and UVA’s Carter Immunology Center, took the immune cells from a 14-year-old clinical trial participant with a form of cancer known as primary refractory acute lymphoblastic leukemia. The trial participant’s immune cells were then genetically engineered by the cell therapy company Kite Pharma before Lee infused them back into the teen.

The experimental approach is similar to the gene therapy that the federal Food and Drug Administration approved for pediatric lymphoblastic leukemia at the end of August – the first gene therapy ever approved in the United States – but Lee hopes the new approach will offer advantages for patients.

“We collect cells from a vein of a patient, the cells are shipped to a central manufacturing facility where they’re made in approximately seven days, and they’re shipped back to us,” Lee said. “So we can have a vein-to-vein time of 16 to 18 days, which is really fast.”

While at the National Institutes of Health, Lee tested the approach using a similar product in more than 50 trial participants. Those participants saw a response rate of approximately 70 percent and a relapse rate of less than 10 percent, he said. The results of the current testing will be available when the 20-site clinical trial has concluded, possibly in less than two years.

UVA recruited Lee from the NIH based on his pioneering research into the development of what are called CAR T-cell therapies, named for the immune cells that are genetically engineered. In addition to the leukemia therapy, he is also seeking to develop new T-cell therapies for deadly forms of pediatric brain cancer. At UVA, he joins a world-class team of researchers exploring the potential of immunotherapy to enhance the body’s ability to fight off disease. “You will see a lot more CAR T-cell treatments coming out of UVA in the future,” he said.

The phase I/II lymphoblastic leukemia trial is evaluating the safety and effectiveness of the approach in pediatric patients. The trial will look at the overall remission rate, the duration of remission and overall survival after 12 months, among other factors.

Participants must be between the ages of 2 and 21 and have lymphoblastic leukemia that has relapsed or not responded to other forms of treatment. There are other eligibility requirements as well.

For more information, visit UVA’s https://uvahealth.com/clinicaltrials/index.cfm?trialid=19087&categoryid=12">clinical trial site. The trial is IRB No. 19087.