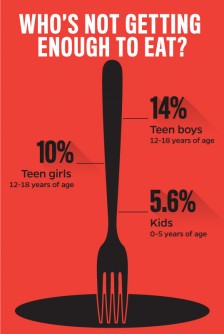 Data from a survey of 1,500 extremely disadvantaged families in Boston, Chicago and San Antonio.

Parents first forgo food themselves, skipping meals to feed their children. But if there still isn’t enough for everyone, the study found parents will feed younger children before teenagers, regularly leaving the older kids — teen boys in particular — without enough to eat.

“If you’re really poor, you try to sacrifice yourself first, but when you’re forced to make some choices, these parents are deciding to let the teens not have enough — if they have to give up on something, they’re giving up on teenagers,” said economist Robert Moffitt, the lead author. “It’s hard to imagine parents having to do that.”

The study, which is the first to demonstrate how children’s food deprivation can differ by age and gender, even within the same household, is published as a working paper for the National Bureau of Economic Research.

Moffitt and co-author David C. Ribar of the Melbourne Institute of Applied Economic and Social Research, analyzed a survey of about 1,500 extremely disadvantaged families in Boston, Chicago and San Antonio. The survey asked parents, along with one of their children, about missing meals, checking in with them several times over six years, from 1999 to 2005.

The families had incomes well below the federal poverty line, making an average of about $1,558 a month, or $18,696 a year. Most were headed by single parents, unemployed, on welfare, and not college-educated. Most were minorities and raising children in rental homes.

Questions for the parents included:

--At any time in the past 12 months, did you or other adults in your household cut the size of your meals or skip meals because there wasn’t enough money for food?

--At any time in the past 12 months, did you or any other adults in your household not eat for a whole day because there wasn’t enough money for food?

--In the past 12 months, were you ever hungry but didn’t eat because you couldn’t afford food?

In these disadvantaged families, researchers found 12 percent of the adults suffered from extreme food hardship, answering “yes” to several of these questions. At the same time, about 4 percent of the children went hungry. Survey questions aimed at a specific child in the household included:

--At any time in the past 12 months, did you cut the size of the child’s meals because there wasn’t enough food?

--At any time in the past 12 months, did the child skip a meal because there wasn’t enough food? Did this happen frequently?

--At any time in the past 12 months, was the child hungry but you just couldn’t afford more food?

The authors found older children in a household went without food more often than younger ones. About 6 percent of children up to 5 years of age weren’t getting enough to eat, and slightly older children, those up to age 11, fared about the same. But with children 12 to 18, nearly 12 percent of them regularly went hungry, researchers found. Of those older kids, boys suffered the most; 14 percent didn’t get enough food, compared to 10 percent of girls.

Moffitt, the Krieger-Eisenhower Professor of Economics at Johns Hopkins, says parents are likely choosing to feed babies and toddlers, whose nutritional needs seem more urgent, and whose food tends to be less expensive. But it’s unclear why teenage boys are going hungry more often than teenage girls. Moffitt suspects it could have something to do with older boys being out of the house more, as well as their being more physically active and needing more calories.

The authors did find that even among the very poor, different levels of hunger within households wasn’t as evident in families who routinely sat down for meals together. Also, if food scarcity was caused by short-term financial strain, like job loss or illness, all children in the house were fed equally again as soon as the parents were able to find money or get back to work.

“The numbers were really surprising and discouraging,” Moffitt said. “So many low-income families were experiencing this – and that was before the Great Recession. Now numbers are likely even worse.”