A state-of-the-art telescope for detecting optical signatures of gravitational waves - built and operated by an international research collaboration, led by the University of Warwick - has been officially launched. 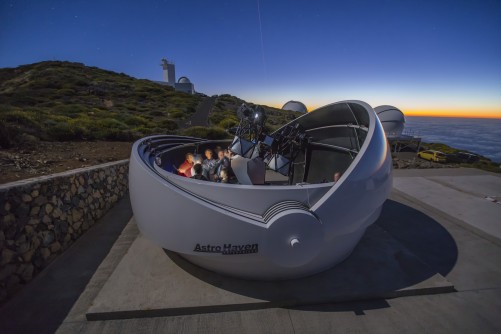 Newswise — A state-of-the-art telescope for detecting optical signatures of gravitational waves - built and operated by an international research collaboration, led by the University of Warwick - has been officially launched.

GOTO is an autonomous, intelligent telescope, which will search for unusual activity in the sky, following alerts from gravitational wave detectors - such as the Advanced Laser Interferometer Gravitational-Wave Observatory (Adv-LIGO), which recently secured the first direct detections of gravitational waves.

Gravitational waves are ripples in the fabric of space-time, created when massive bodies – particularly black holes and neutron stars – orbit each other and merge at very high speeds.

These waves radiate through the Universe at the speed of light, and analysing them heralds a new era in astrophysics, giving astronomers vital clues about the bodies from which they originated – as well as long-awaited insight into the nature of gravity itself.

First predicted over a century ago by Albert Einstein, they have only been directly detected in the last two years, and astronomers’ next challenge is to associate the signals from these waves with signatures in the electromagnetic spectrum, such as optical light.

This is GOTO’s precise aim: to locate optical signatures associated with the gravitational waves as quickly as possible, so that astronomers can study these sources with a variety of telescopes and satellites before they fade away.

GOTO is a significant project for the Monash-Warwick Alliance, through which the construction of the telescope was partially funded. The Alliance combines the exceptional research and teaching capabilities of two world-class universities to meet the challenges of the 21st century.

Dr Danny Steeghs, from Warwick’s Astronomy and Astrophysics Group, is leading the project. He comments:

"After all the hard work put in by everyone, I am delighted to see the GOTO telescopes in operational mode at the Roque de los Muchachos observatory. We are all excited about the scientific opportunities it will provide.”

Dr. Duncan Galloway, from the School of Physics & Astronomy at Monash University, comments:

“GOTO is very significant for the Monash Centre for Astrophysics. We’ve invested strongly in gravitational wave astronomy over the last few years, leading up to the first detection announced last year, and the telescope project represents a fundamentally new observational opportunity.

“It’s really satisfying seeing a research collaboration that we’ve build over many years coming to fruition in such an exciting way, and we couldn’t have got here without the support of the Alliance and the participating universities.”

GOTO is the latest addition to the University of Warwick’s astronomical facility at La Palma, which includes the SuperWASP Exoplanet discovery camera - the most successful ground based exoplanet discovery project in existence.

GOTO is operated on behalf of a consortium of institutions including the University of Warwick, Monash University, the Armagh Observatory, Leicester and Sheffield Universities, and the National Astronomical Research Institute of Thailand (NARIT).

Professor Pam Thomas, the University of Warwick’s Pro-Vice-Chancellor (Research) was in attendance at the inauguration ceremony.

La Palma is one of the world’s premier astronomical observing sites, owing to the fact that it is the steepest island in the world and has very little pollution – giving researchers clear views of the sky.