Telling the Time by Colour 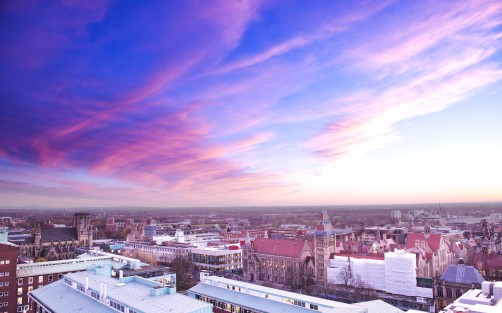 David Gennard, The University of Manchester

The University of Manchester at sunset

Newswise — Research by scientists at The University of Manchester has revealed that the colour of light has a major impact on how our body clock measures the time of day.

It’s the first time the impact of colour has been tested and demonstrates that colour provides a more reliable way of telling the time than measuring brightness.

In research being published on April 20th in the Open Access journal PLOS Biology, the researchers looked at the change in light around dawn and dusk to analyse whether colour could be used to determine time of day. Besides the well-known changes in light intensity that occur as the sun rises and sets they found that during twilight, light is reliably bluer than during the day.

The scientists next recorded electrical activity from the body clock while mice were shown different visual stimuli. They found that many of the cells there were more sensitive to changes in colour between blue and yellow than to changes in brightness.

The scientists then used measurements of the changes in the colour spectra taken from the top of the University’s Pariser Building, to construct an artificial sky which recreated the daily changes in colour and brightness.

Mice were placed beneath the sky for several days and their body temperature was recorded. As expected for nocturnal creatures, the highest body temperatures occurred just after night fell when the sky turned a darker blue – indicating that their body clock was working optimally.

When just the brightness of the sky was changed, with no change in the colour, the mice became more active before dusk, demonstrating that their body clock wasn't properly aligned to the day night cycle.

Dr Timothy Brown from the Faculty of Life Sciences led the research: “This is the first time that we’ve been able to test the theory that colour affects the body clock in mammals. It has always been very hard to separate the change in colour to the change in brightness but using new experimental tools and a psychophysics approach we were successful.”

He continues: “What’s exciting about our research is that the same findings can be applied to humans. So in theory colour could be used to manipulate our clock, which could be useful for shift workers or travellers wanting to minimise jet lag.”