Temple Breaks the Guinness World Record for Most Sandwiches Made in an Hour. 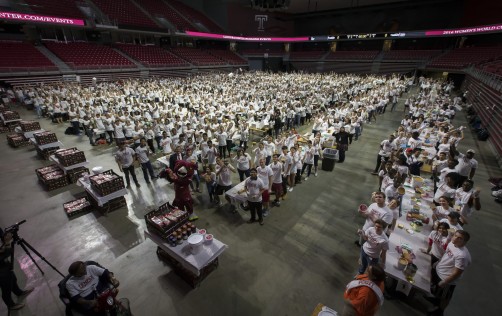 The Main Campus Program Board at Temple University smashed the Guinness World Record for the number of peanut butter and jelly sandwiches made in one hour. The grand total? 49,100! All sandwiches were donated to shelters and food banks in the surrounding community.

It was one for the record books.

Newswise — Temple University is officially the Guinness World Record holder for most sandwiches made in one hour. More than 1,350 volunteers made history as part of Monday’s PB&J Day, a community service sandwich-making frenzy at the Liacouras Center.

Temple shattered the previous record of 39,303 by nearly 10,000, making 49,100 sandwiches in just one hour. The finished sandwiches were distributed to more than 15 food banks in the Philadelphia region.

“This is a great opportunity to bring the local community together with students, faculty, staff and alumni for a common cause, to build sandwiches for those in need,” said Program Coordinator for Student Activities Bryan Newman, who advised the Main Campus Program Board, which coordinated the event.

Volunteers—including students, faculty, staff and alumni—manned sandwich-making tables made up of 18 people each. A designated team lead anchored each station and assigned runners, who darted back and forth from the stations to fill the boxes as the judge and official witnesses observed the record-breaking attempt.

At 8:04 p.m., Conlon made the official announcement everyone had been waiting for—Temple had broken the record. In response, volunteers cheered, celebrated and posed for pictures with the hard-earned certificate.

And although breaking a world record is quite an accomplishment, Newman and students representing the Main Campus Program Board agreed that being able to give back on such a large scale is what made the event truly fulfilling.

Youth Services, Inc., a local organization that serves at-risk teens, received 3,000 of the sandwiches. Maurice Hayman, marketing manager, volunteered at the event and talked about the far-reaching impact of Temple students’ efforts.

“For these people in need to be able to have all of these young folks that are coming together to make sandwiches—it's really going to touch their hearts,” Hayman said.