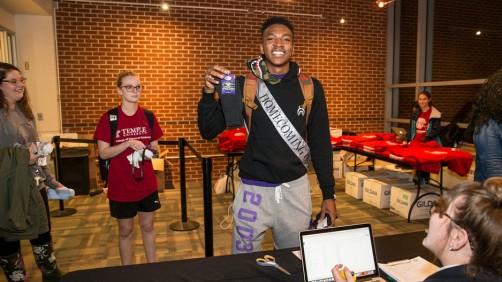 As part of Homecoming, Temple students, faculty and staff donated 2,798 pairs of socks to go to people in need, breaking the previous Guinness World Record of the largest-ever sock donation.

Previous Next
Newswise — Students, faculty, staff and even a local apparel manufacturer with 318 pairs of socks to sparestopped by the Howard Gittis Student Center to help Temple set a new Guinness World Record. With 2,798 pairs of socks collected, Temple officially is the record holder for the largest sock drive in eight hours at a single location. The previous record was 2,459 pairs.
Why socks?
Most people donate clothing that they no longer want. But when it comes to socks, it’s a different story. They’re frequently tossed into the trash, which creates a lack of socks available at various organizations that work to supply the homeless population with clothing.
Where are the socks going?
They’re being donated to The Joy of Sox, an organization dedicated to collecting new socks and distributing them to shelters and other aid facilities that serve homeless populations. The socks donated by the Temple community will benefit those in need in the Philadelphia region, but The Joy of Sox supports various service organizations throughout Pennsylvania, the country and the world.
Who was involved?
Main Campus Program Board (MCPB) led the charge to organize this event. Last year, the organization brought the Temple community together to set a record for the most peanut butter and jelly sandwiches made in one hour. Those sandwiches—all 49,100 of them—were distributed to more than 15 food banks in the region. Now, Program Coordinator for Student Activities Bryan Newman, who advises MCPB, has tasked one of his students to find a new record to beat each year that will not only bring Temple folks together, but will also help the community.
Senior Alyssa Woodard, MCPB’s director of community service events, worked to identify a record to beat and planned to make it all happen.
“We’re starting a new tradition to break a new record every year, but it really isn’t about us,” Woodard said. “It’s about who we are helping.”