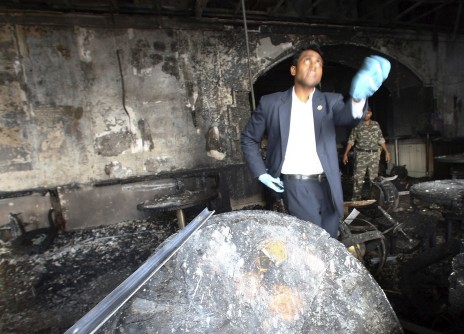 Security services survey a destroyed room inside the Taj Mahal Palace and Tower Hotel after the armed siege on Nov. 29, 2008, in Mumbai, India. The city of Mumbai was rocked by multiple coordinated terrorist attacks that targeted locations popular with foreigners, late on Nov. 26, killing at least 166 people.

Newswise — BUFFALO, N.Y. – When terrorists strike, emergency workers who have the proper training, information access and a positive work environment will make better decisions, according to research from the University at Buffalo School of Management.

Published in IIMB Management Review, the study was prompted by the terrorist attacks in Mumbai, India, on Nov. 26, 2008, that killed 166 people and are often referred to as India’s 9/11.

The research, co-authored by H. Raghav Rao, PhD, SUNY Distinguished Service Professor, Management Science and Systems Department in the UB School of Management, focused on understanding the motivation and decision-making process of first responders during the attacks.

“An officer in the police department, whether in the control room or in the field, makes many critical decisions during a situation like the Mumbai terrorist attacks,” says Rao. “Each of these decisions is driven by a motivation, which is usually derived from knowledge of the situation at hand.”

A high-res downloadable photo of Rao is available here: http://www.buffalo.edu/news/releases/2015/02/027.html.

The study analyzed surveys from 31 Mumbai Police officers who were involved in the immediate response to the terrorist attacks. In addition, they conducted interviews with 15 middle- to high-ranking officers who directly assisted in the efforts to mitigate the effects of the attacks.

The researchers analyzed the information gathered during these surveys and interviews and offer the following recommendations to prepare first responders for terrorist attacks:

• Remove barriers to information sharing. When responders have timely access to important information in a crisis, they have increased motivation to take action.• Improve training. Improved training in how to deal with, assess the severity of and quickly respond to crisis situations will lead emergency workers to more helpful actions and decisions.• Establish an optimistic work environment. Hopefulness improves the likelihood that responders will take positive steps to alleviate crisis situations.• Create a decision support system. Officers should be trained to pick up important information, make decisions from that information and be provided with the tools they need to communicate those decisions to the necessary personnel.

The authors also recommend a number of ways Mumbai Police can improve information sharing during such a crisis.

“Many callers to the Mumbai Police control room during the terrorist attacks didn’t know the street names in their immediate neighborhood,” says Rao. “A campaign to educate residents about these names would help first responders more effectively reach people in need in the future.”

Rao collaborated on the project with Manish Agarwal, PhD, associate professor of information systems and decision sciences in the University of South Florida Muma College of Business, and Rajarshi Chakraborty, doctoral student of Management Science and Systems in the UB School of Management. The study was supported by a grant from the National Science Foundation.

The UB School of Management is recognized for its emphasis on real-world learning, community and economic impact, and the global perspective of its faculty, students and alumni. The school also has been ranked by Bloomberg Businessweek, the Financial Times, Forbes and U.S. News & World Report for the quality of its programs and the return on investment it provides its graduates. For more information about the UB School of Management, visit mgt.buffalo.edu.