Test Strips for Cancer Detection Get Upgraded with Nanoparticle Bling 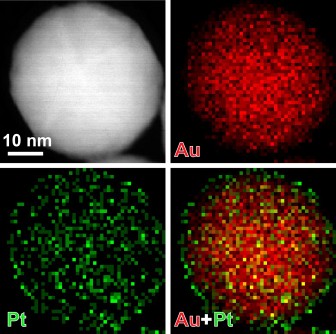 By coating nanoparticles in thin layers of platinum, only a few atoms thick, Xia's team was able to increase the sensitivity of test strips that detect prostate-specific antigen (PSA). 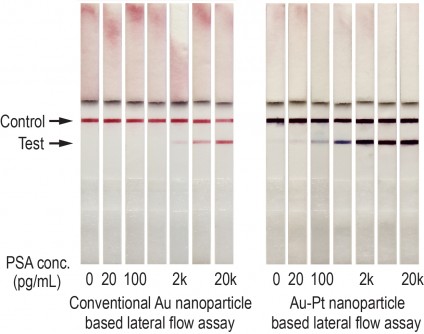 Gold nanoparticles appear red on test strips; the high-sensitivity mode developed by Xia's team is much darker on the test strip and shows a two-magnitude increase in sensitivity.

Newswise — The most common test strip people might think of for diagnosis is a home pregnancy test. Pregnant women have steadily increasing levels of the biomarker human chorionic gonadotropin (hCG), which is easily detectable in urine and a thin, colorful strip of antibodies will appear when hCG is present.

However, there's a lot more hCG in pee than there is of cancer biomarkers in blood. Identifying minute concentrations is the greatest challenge of test strips that have been developed to detect everything from cancer to infectious diseases to heart problems. The actual stripe on the paper simply isn't sensitive enough to change color for a human eye to easily see it at concentrations that make a life-changing difference.

Some nanoparticle bling could change that. And it would not greatly impact the cost of current test strips according to new research led by Xiaohu Xia, an assistant professor of chemistry at Michigan Technological University. The research was published recently in Nano Letters.

Gold nanoparticles have been used widely for decades for in vitro diagnostics to make medical care and treatment decisions quicker and easier for physicians and patients. What is new with Xia's research is adding a dual function to the nanoparticle by decorating each tiny sphere in a thin skin of platinum.

Doing so makes it easier for the naked eye to observe changes on the test strip. It also increases the accuracy and provides quantifiable results for extremely low concentrations of key biomarkers, which are measured in picograms per milliliter. In Xia’s study, they focused on prostate-specific antigen (PSA), looking for signals of mere trillionths of a gram in a single drop of blood.

"We require the detection to be very sensitive," Xia says, explaining that platinum is a great catalyst and a little goes a long way to boost the chemical reaction that causes a test strip stripe to show up. "Gold nanoparticles are a distinct red color and as long as the platinum is ultrathin, the red of the gold nanoparticles will show through."

What’s more is that Xia estimates the thin platinum skin will not significantly increase the cost of current gold nanoparticle test strips on the market and the design is compatible with detecting other kinds of cancer biomarkers.

“A key component in the test strip is the antibodies, which are unique to each cancer biomarker, and are commercially available,” he says. “We can easily replace the antibody, so this is a general detection platform.”

The next step Xia says is verifying the application for other cancer biomarkers and even experimenting with applications for infectious diseases.

“The advantage of this technology is simple,” he says. “Point-of-care devices mean people can buy them and do a diagnosis on their own; in a clinic, this is a cheap and quick technique that also improves diagnosis and therefore treatment.”

All it took was a bit of decorating. Adding some new platinum bling to old-school gold nanoparticles will help push improved test strip technology out of labs into clinics and homes.