May be possible to use approach with other emerging infectious diseases

RESEARCHERS AT WASHINGTON UNIVERSITY IN ST. LOUIS HAVE DEVELOPED A BLOOD TEST THAT QUICKLY CAN DETECT THE PRESENCE OF ZIKA VIRUS INFECTION. THE NEW TEST DOESN’T REQUIRE REFRIGERATION AND CAN BE READ ONSITE IN A CLINIC, POTENTIALLY MAKING IT VERY USEFUL IN THE PARTS OF THE WORLD WHERE ZIKA HAS BEEN SUCH A PROBLEM IN RECENT YEARS. JIM DRYDEN HAS MORE… 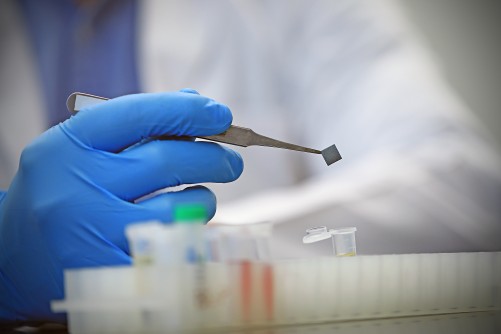 A Washington University researcher holds a piece of paper coated with tiny gold nanorods that can be used to test blood for Zika virus. If a patient whose blood is being tested has come into contact with Zika virus, the blood will contain substances that react with a protein coating the nanorods. The test paper doesn't need to be refrigerated, and test results are available in about 15 minutes. 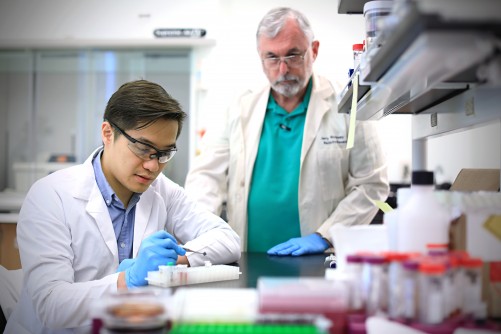 Newswise — Washington University in St. Louis researchers have developed a test that quickly detects the presence of Zika virus in blood.

Currently, testing for Zika requires that a blood sample be refrigerated and shipped to a medical center or laboratory, delaying diagnosis and possible treatment. Although the new proof-of-concept technology has yet to be produced for use in medical situations, the test’s results can be determined in minutes. Further, the materials required for the test do not require refrigeration and may be applicable in testing for other emerging infectious diseases.

Findings from the small study — from Washington University School of Medicine and the School of Engineering & Applied Science — is available online in the journal Advanced Biosystems.

The researchers tested blood samples taken from four people who had been infected with Zika virus and compared it to blood from five people known not to have the virus. Blood from Zika-infected patients tested positive, but blood from Zika-negative controls did not. The assay produced no false-positive results.

Among the reasons such a test is needed, according to the researchers, is that many people infected with Zika don’t know they’re infected. Although symptoms include fever, joint pain, muscle pain and rash, many people don’t feel ill after being bitten by an infected mosquito. Testing is particularly important for pregnant women because Zika infection can cause congenital Zika syndrome, which contributes to several neurologic problems in the fetus or newborn infant.

“Zika infection is often either asymptomatic or mildly symptomatic,” said Evan D. Kharasch, MD, PhD, one of the study’s three senior investigators. “The most effective way to diagnose the disease is not to wait for people to develop symptoms but to do population screening.”

That strategy requires inexpensive, easy-to-use and easy-to-transport tests. Kharasch, the Russell D. and Mary B. Shelden Professor of Anesthesiology, collaborated with Srikanth Singamaneni, PhD, an associate professor of mechanical engineering & materials science, and Jeremiah J. Morrissey, PhD, a research professor of anesthesiology, to create the test, which uses gold nanorods mounted on paper to detect Zika infection within a few minutes.

“If an assay requires electricity and refrigeration, it defeats the purpose of developing something to use in a resource-limited setting, especially in tropical areas of the world,” said Singamaneni. “We wanted to make the test immune from variations in temperature and humidity.”

The test relies on a protein made by Zika virus that causes an immune response in infected individuals. The protein is attached to tiny gold nanorods mounted on a piece of paper. The paper then is completely covered with tiny, protective nanocrystals. The nanocrystals allow the diagnostic nanorods to be shipped and stored without refrigeration prior to use.

To use the test, a technician rinses the paper with slightly acidic water, removing the protective crystals and exposing the protein mounted on the nanorods. Then, a drop of the patient’s blood is applied. If the patient has come into contact with the virus, the blood will contain immunoglobulins that react with the protein.

“We’re taking advantage of the fact that patients mount an immune attack against this viral protein,” said Morrissey. “The immunoglobulins persist in the blood for a few months, and when they come into contact with the gold nanorods, the nanorods undergo a slight color change that can be detected with a hand-held spectrophotometer.

“With this test, results will be clear before the patient leaves the clinic, allowing immediate counseling and access to treatment.”

The color change cannot be seen with the naked eye, but the scientists are working to change that. They’re also working on developing ways to use saliva rather than blood.

Although the test uses gold, the nanorods are very small. The researchers estimate that the cost of the gold used in one of the assays would be 10 to 15 cents.

As other infectious diseases emerge around the world, similar strategies potentially could be used to develop tests to detect the presence of viruses that may become problematic, according to the researchers.