Attacking Cancer by Working Together

26-May-2017 2:05 PM EDT, by University of North Carolina at Charlotte
favorite_border 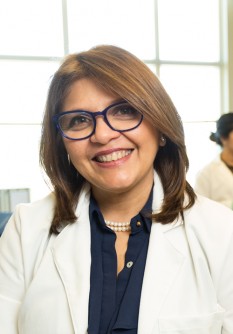 MUC1 is a protein present on the cells that line most organs. It lubricates and protects them. When cells become malignant, the MUC1 protein changes and signals tumor cells to multiply.

As cancer attacked formerly healthy mice, their immune systems spewed antibodies to fight off the tumors. Tumor cells were lit up in fluorescent green, signifying the antibody was binding to the abnormal MUC1 proteins – and ignoring the healthy cells.

It’s the same thinking behind the emerging field of immunotherapy, which has led to new “targeted” drugs that are giving unexpected years of survival to many cancer patients.

Researchers describe these new therapies as “smart bombs” that attack cancer cells, killing them without affecting surrounding healthy cells. That compares with traditional chemotherapy that kills whatever it touches, including healthy tissue.

“Cancer is 200 different diseases, so no one person will eradicate them all,” says Dr. Mukherjee. “However, several faculty researchers each focused on one disease can attack cancer by working together.”

As the Irwin Belk Endowed Professor of Cancer Research at UNC Charlotte, Mukherjee is transforming the ways in which cancer is diagnosed and treated.

Prior to joining UNC Charlotte in 2008, Mukherjee was with the Mayo Clinic. She received her bachelor’s degree in microbiology from Bombay University, India, and her master’s and doctoral degrees from the University of London.

At the Mayo, Mukherjee worked with Sandra Gendler, a respected tumor biologist. Together they did experiments on mice to see if vaccines could prevent breast and pancreatic cancer. As part of that, Mukherjee began helping Gendler try to determine the role of a protein called MUC1 (muck-one) in the development of cancer.

In their experiments, Gendler and Mukherjee tried to immunize mice against the abnormal MUC1 proteins, just like humans can be immunized against the flu. They injected the mice with vaccines, and as expected, their immune systems revved up for a fight. But instead of succumbing, the tumors continued to grow.

Mukherjee made a cancer discovery at UNC Charlotte in 2009, what about using an antibody?

Since then, Mukherjee started a biotech company, OncoTab, Inc. that is now headed by her husband, Rahul Puri. They are making a blood test that can help diagnose breast and pancreatic cancers.

She has designed innovative approaches to more accurately detect breast cancer early and is developing targeted therapy and imaging for pancreatic, ovarian and colon cancers.

To date, Mukherjee has published 65-plus peer-reviewed journal articles that have been cited or referenced more than 11,000 times.

Her groundbreaking cancer research has produced one U.S. patent and has resulted in grants from the National Institutes of Health, the U.S. Department of Defense, and the Susan G. Komen Foundation totaling more than $3.5 million as principal investigator and more than $500,000 as co-investigator.