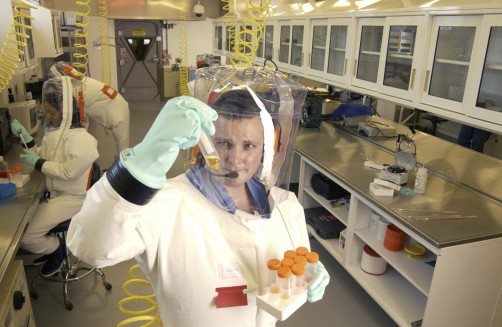 Newswise — SAN ANTONIO (April 9, 2015) – Rapidly diagnosing infectious disease is critical to limiting its spread and containing an outbreak; as the world has witnessed over the past year with the spread of Ebolavirus disease. Scientists at Texas Biomedical Research Institute in San Antonio are receiving funding from the National Institutes of Health in the form of a $2.36 million R01 grant over the next five years to focus efforts on exploring and developing a novel mechanism of Filovirus detection – using llama antibodies.

Perhaps the most sensitive diagnostic tool currently available is to specifically test for the genome (DNA or RNA) of a virus using PCR methods. Later on during infection, another tool is to look for specific antibodies produced by the host in response to that virus. However, scientists in the lab of Dr. Andrew Hayhurst at Texas Biomed are exploring the potential of detecting specific building blocks of virus particles – polymeric proteins.

“Detecting single viral protein components can be challenging, especially at very low levels; however, most viruses are repetitive assemblies of a few components, with some existing as polymers of several thousand copies, which present great targets for our llama antibodies,” Hayhurst explained.

He described the process similar to that of microscopic Velcro hooks; whereby, one hook is the viral protein and the other is the llama antibody.

Seeking to understand the mechanism of the interaction between llama antibody and virus protein, Hayhurst collaborates with Drs. Alex Taylor and John Hart of the UT Health Science Center X-ray crystallography core lab. Here, the atoms comprising the interface between antibody and virus protein can be revealed, giving clues to how and exactly where the llama antibodies bind.

“We’ve had these beautiful structures for quite a while now generated with the help of former lab member Dr. John Garza, but I only appreciated the significance of them more recently when pondering viral evolution,” Hayhurst said. “Examining all the strains of Marburg virus that have emerged since 1967, we can graft predicted mutations onto our crystal structures to indicate that our antibodies bind a highly conserved structure that has never changed.”

RNA viruses like Marburg and Ebola (and others like influenza) are prone to mutate and evolve which can make them undetectable if care is not taken to ensure the PCR test or antibody based test can detect the latest strains. The anti-Marburg llama antibodies studied so far do not appear to suffer from this vulnerability as they target a region of the virus that has so far shown no capacity to mutate.

“Our aim is to develop these llama antibodies into streamlined tests designed to detect all Marburg and Ebola strains known and potentially those yet to emerge,” Hayhurst said. “Our goal is to help to safeguard human health both now and into the future.”

Hayhurst points out that the llama antibody tests do not match the sensitivity of current qRT-PCR tests; however, one of the goals of this current study is to engineer improved tests.

The United Nations just this week continued its call for vigilance to the threat posed by Ebolavirus disease, as more than 24,000 people have been infected with the virus since late 2013 and more than 10,000 people have died in the latest outbreak.

This study, titled “Mechanism and Evolution of Filoviral Monoclonal Affinity Reagent Sandwich Assays,” is being funded by an RO1 grant from the National Institutes of Health National Institute of Allergy and Infectious Diseases. The award is for a $470,814 grant each year for five years.

Texas Biomed, formerly the Southwest Foundation for Biomedical Research, is one of the world's leading independent biomedical research institutions dedicated to advancing health worldwide through innovative biomedical research. The Institute is located on a 200-acre campus on the northwest side of San Antonio, Texas. Texas Biomed partners with hundreds of researchers and institutions around the world to develop vaccines and therapeutics against viral pathogens causing AIDS, hepatitis, herpes, hemorrhagic fevers and parasitic diseases. The Institute also has programs in the genetics of cardiovascular disease, diabetes, obesity, psychiatric disorders and other diseases. For more information on Texas Biomed, go to www.TxBiomed.org.