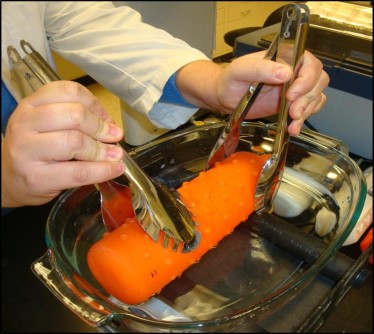 In the lab, Wooten and Smith created simulated dog saliva and used salad tongs to replicate a dog chewing on the toy. They found BPA and phthalates in the saliva after testing.

Newswise — Sometimes orange, sometimes white, dog trainers often use plastic fetching batons called bumpers to teach dogs how to retrieve. But researchers at Texas Tech University have discovered that the dogs also may fetch a mouthful of potentially dangerous chemicals at the same time.

Researchers also found these chemicals, though at significantly lower concentrations, in a multitude of plastic chew toys purchased from a pet store.

The research was conducted by Kimberly Wooten, a master’s student using the project as her thesis, and Phil Smith, an associate professor of terrestrial ecotoxicology at The Institute of Environmental and Human Health at Texas Tech. Though unpublished, Wooten presented the results at the Society of Environmental Toxicology and Chemistry conference held in California.

“I raise and train Labrador retrievers and hunt with them as well,” Smith said, explaining what inspired him and Wooten to conduct the experiments. “In the process of training a lab, you do a lot of work with these plastic bumpers. I have a lot of bumpers in my garage, and they spend a lot of time in the mouths of my retrievers. Well, lots of attention has been given to chemicals in plastics lately regarding their effects on humans. Since we all care about our dogs, and we want them to be as healthy and smart and well-behaved as possible, we decided to look into this.”

Wooten and Smith said they predicted the possibility that the bumpers could leach phthalates and bisphenol A (BPA), which are used to give elasticity to plastic and vinyl and are known endocrine disruptors that mimic estrogen or act as anti-androgens and could lead to negative health effects. However, both said the findings have created more questions than answers because hardly any data exists on long-term effects of these chemicals on man’s best friend.

“The whole end goal was to answer the questions, ‘What does this mean for my pet? Is this a concern for our health?’” Wooten said. “We don’t have a good answer yet because there’s no good data to compare to our findings.”

To test for the chemicals, Wooten and Smith created simulated dog saliva, then simulated chewing by squeezing the bumpers and dog toys with stainless steel salad tongs.

Some bumpers and toys were weathered outside as well to see if older toys gave off more chemicals, Smith said.

“We found that the aging or weathering the toys increased concentrations of BPA and phthalates,” Smith said. “The toys had lower concentrations of phthalates than the bumpers, so that’s good news. But they also had some other chemicals that mimicked estrogen. We need to find out what those are.”

Wooten said BPA and phthalates can have effects on developing fetuses and can have a lifelong effect on offspring on lab animals. Some studies on humans conclude that BPA poses no health risks while others cite a number of adverse effects. Because of this, the U.S. government banned the use of BPA in baby bottles in 2012.

Wooten said questions still remain also as to how much of a dose a dog may get from playing with the bumpers, since it was difficult to say how much of these chemicals may actually leach out into a dog’s mouth.

“The interaction of pet health and environmental chemicals is understudied,” Wooten said. “What may be a safe dose for one species isn’t always a good measure for another species. But the amount of BPA and phthalates we found from the bumpers would be considered on the high end of what you might find in children’s toys.”