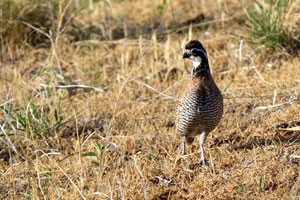 Quail population decline may be attributed to more than just habitat.

Newswise — In June of 2010, Texas ranch owner and quail hunter Rick Snipes said he heard so many bobwhite quail calling in the mornings that he couldn’t even tell how many were in the area. It seemed he could expect excellent hunting by October.

By August, the silence was deafening. Snipes found about five birds for every hundred he had seen before. Other ranchers in the Rolling Plains around him had lost their birds, too. That meant big economic losses for this area and others that depend on the income generated by hunting.

This forensic mystery culminated into a historic effort dubbed “Operation Idiopathic Decline” to examine the role of diseases and parasites in the decline of quail. The foundation associated the Rolling Plains Quail Research Ranch (RPQRR) has donated a total of $2.75 million in private funding to the project. About half the proceeds have gone to The Institute of Environmental and Human Health (TIEHH) at Texas Tech University.

In this study – the largest quail disease research project ever undertaken – scientists at Texas Tech, Texas A&M and Texas A&M-Kingsville began looking for answers on 35 ranches or wildlife management areas located in 25 counties in West Texas and 10 in Western Oklahoma, as well as at the RPQRR’s 4,700-acre ranch near Roby. Project organizers estimate the total coverage area of this study includes about 19 million acres of land.

In the past two years, scientists have collected data from 1,240 birds. While the answers still remain elusive, some of the factors they already have discovered have surprised scientists and landowners alike.

In 2010, Texas Tech formed another quail research project called the Quail-Tech Alliance, a five-year, $1.25 million study. Scientists with this project hope to discover reasons for the area’s quail decline as well as develop new methods for landowners enrolled in the project to use to stabilize, maintain and even increase quail populations, said Brad Dabbert, research project manager and an associate professor at Texas Tech’s Department of Natural Resources Management (NRM).

The Quail-Tech Alliance is a partnership between Texas Tech’s NRM and Quail First, a nonprofit organization.

For more information on the OID project see http://www.youtube.com/watch?v=Djo5gzDjA2w .