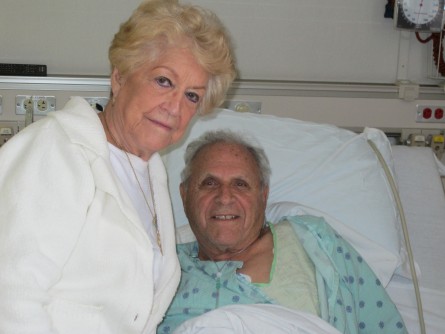 Serafino Alfe, 87, fried himself when he fell into a turkey deep fryer last Thanksgiving. He was treated for third degree burns - the worst - at Loyola University Health System.

Newswise — More than 141 serious fires and hot-oil burns have been reported from the use of turkey fryers over the past decade, according to the U.S. Consumer Product Safety Commission. And no one knows that better than Serafino Alfe. The 87-year-old Mount Prospect resident made national news last year when he wound up at the Loyola Burn Center with third-degree burns – the worst type of burn– on his leg. “I tripped and fell right into the deep fryer and basically fried myself,” said the volunteer who was deep-frying turkeys at a charity fundraiser. Alfe has undergone several surgeries and, almost one year later, he is still on the mend. “Time is tissue,” said Richard Gamelli, director of the Burn and Shock Trauma Institute at Loyola University Medical Center. “Even when the exterior skin is cooled, often the deeper flesh is still burning and causing damage.”

Alfe, like many, savored the moist, flavorful meat that comes from deep frying the bird in 30 quarts of scalding oil. “I have used a deep fryer for many years but last year I caught my shoe on the edge of some cardboard under a fryer,” he explained about last year’s mishap. “We were using the older models that did not have secure lids and gallons of hot oil poured everywhere – including over my leg and upper body.”

Loyola’s Burn Center is one of the busiest in the Midwest, treating nearly 600 patients annually in the hospital and another 3,500 patients each year in its clinic. More than 40 percent of the burn cases are children.

“I attended the charity fundraiser this year but as a golf player, not as a cook,” Alfe said. “And we no longer deep fry the turkeys but roast them in the oven, as a safety precaution.”

Taking care to not become a victim of a fire and serious burns applies equally inside the home on Thanksgiving Day, the leading day for cooking fires, with three times as many as on an average day, according to the National Fire Protection Association.

“If a turkey fryer is used the way it’s supposed to be used by people who are not impaired by alcohol or drugs, I think they’re fine,” said Dr. Thomas Esposito, chief of the Division of Trauma, Surgical Critical Care and Burns in the Department of Surgery, Loyola University Chicago Stritch School of Medicine. “Injuries from turkey fryers are rare, but when they happen to you or a family member, that doesn’t matter – they are very devastating.”

If you’re planning to use a turkey fryer, Esposito said safety tips to heed include:

* Don't drink and cook-- frying or baking.• Look for the newer fryers with sealed lids to prevent oil spills.• Keep the fryer in full view while the burner is on.• Keep children and pets away from the cooking area.• Place the fryer in an open area away from all walls, fences or other structures. • Never use the fryer in, on, or under a garage, breezeway, carport, porch, deck or any other structure that can catch fire.• Slowly raise and lower the turkey to reduce hot-oil splatter and to avoid burns. • Never cook in short sleeves, shorts or bare feet. Cover all bare skin when dunking or removing the bird.• Protect your eyes with goggles or glasses.• Immediately turn off the fryer if the oil begins to smoke. • Make sure the turkey is completely thawed and be careful with marinades. Oil and water don’t mix and water can cause oil to spill over, creating a fire or even an explosion. • Don’t overfill fryer with oil. Turkey fryers can ignite in seconds after oil hits the burner.• Keep a fire extinguisher appropriate for oil fires close at hand and be familiar with how to operate it.• Do not use a hose in an attempt to douse a turkey fryer fire.• If you do burn yourself, or someone else is burned, seek immediate medical attention.

$15 million in annual U.S. property damage is caused by deep fryer fires. “It doesn’t matter if it is a turkey fryer or a conventional oven, you should always take great care when using appliances, vehicles and any other device that has the potential to cause great harm to yourself and others if used in a careless, irresponsible manner,” Esposito said.

The Burn Center provides comprehensive care for adults and children with thermal injuries, electrical burns, chemical injury, frostbite, toxic epidermal necrolysis, inhalation injury and complex soft-tissue infections. A multidisciplinary team, which includes resuscitation, pulmonary support, wound management, nutritional support and rehabilitation personnel, provide care in the Burn Center. The Loyola Burn Center was awarded verification by the American College of Surgeons (ACS) and the American Burn Association (ABA). This recognition is only granted to those programs that have met and exceeded the ACS and ABA standards and review. Loyola is the only hospital in Illinois treating burn patients that has attained this prestigious distinction.