The “Resolution Revolution” Arrives at UAB with Installation of a $600,000 Cryo-Electron Microscope Detector 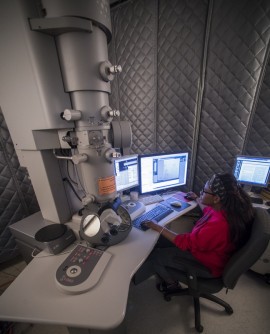 Newswise — BIRMINGHAM, Ala. – Imaging of biomolecules is taking a leap forward at the University of Alabama at Birmingham.

UAB installed a $600,000 direct electron detector on its cryo-electron microscope in January, and validation tests to fine-tune the resolution are underway, says Terje Dokland, professor of microbiology and director of the UAB Cryo-Electron Microscopy Core.

“UAB needed to invest in this,” Dokland said, “to keep up with one of the most important developments in structural biology in decades. I think many projects at UAB can benefit from this technology.”

State-of-the-art cryo-electron microscopy is particularly useful for near-atomic resolution structure determination of larger proteins, membrane proteins or lipid-containing samples like membrane-bound receptors, and complexes of several biomolecules together, as well as three-dimensional tomographic imaging of whole cells, or ultrathin slices of cells.

“Since about 2014, the new detectors have made cryo-electron microscopy come of age,” Dokland said. “We have seen a tremendous jump in resolution, known as the resolution revolution.”

The direct electron detectors are more sensitive, are faster and have reduced noise compared to the charge-coupled devices they replace. The direct electron detector can take hundreds of frames per second, allowing detection of individual electrons and on-the-fly correction of specimen movement, while the charge-coupled devices required several seconds per frame. With new software, large amounts of data can be collected in an automated fashion.

“With the new detector, we can resolve structures to better than 4 angstroms,” Dokland said. The structure determination is achieved without the need to grow crystals for X-ray diffraction.

Different contributions to cryo-electron microscopy — meaning electron microscopy at extremely cold temperatures — have developed over decades, as noted by the 2017 Nobel Prize in chemistry awarded to three of the research pioneers.

Key elements of cryo-electron microscopy are:

Funding for the direct electron detector was provided by the UAB School of Medicine and the UAB Office of the Vice President for Research, as part of an effort to support structural biology at UAB.