The Battle Against Aedes Aegypti, the Mosquito That Spreads Zika 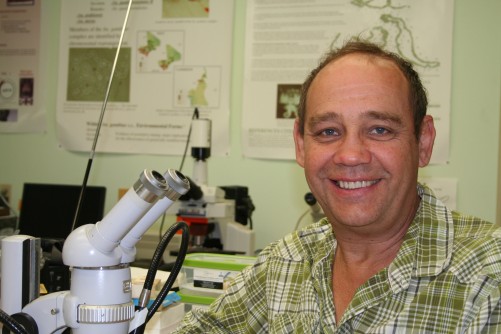 Newswise — The UC Mosquito Research Laboratory in Parlier is the epicenter of California research on the Aedes aegypti mosquito, a tiny, black and white mosquito that can spread the Zika virus.

Aedes aegypti were first identified in California in June 2013, when they were found in the San Joaquin Valley communities of Clovis and Madera. They have now been detected in certain Fresno County neighborhoods, plus the Bay Area, and Southern California, according to the California Department of Public Health.

To date, the Zika virus hasn't been found in the California mosquitoes, however with thousands of Americans traveling to Brazil for the 2016 Olympics, plus travelers regularly visiting other countries with outbreaks of Zika, some could be carriers of the virus when they come home.

The UC Mosquito Research Laboratory, located at the 300-acre UC Kearney Agricultural Research and Extension Center, is led by entomologist Anthony Cornel, Ph.D. He is working with the Consolidated Mosquito Abatement District (CMAD) on research projects aimed at controlling this new mosquito menace.

“When Aedes aegypti first came to the United States a few hundred years ago, there were major epidemics of yellow fever in the East and South,” Cornel said. “Today this mosquito serves as the vector of three other serious viruses, dengue, Chikungunya and Zika, which are major threats to global public health.”

What keeps him up at night, Cornel said, is grave concern that there will be a Zika outbreak in California.

“Right now, our only control tool in response to a disease outbreak is use of insecticides,” Cornel said. “If Zika breaks out here, we will have to do whatever we can to reduce the number of adult Aedes aegypti mosquitoes right away, and a single insecticide application isn't going to do it.”

The Cornel lab at Kearney and the Consolidated Mosquito Abatement District are conducting myriad laboratory and field research trials to evaluate insecticide treatment options, to minimize potential mosquito breeding sites, and to understand Aedes aegypti biology and behavior in order to inform control decisions should such an outbreak occur. Following are summaries of research underway that involves the UC Mosquito Research Laboratory in the fight against the Zika vector Aedes aegypti.

Working in cooperation with scientists at the University of Kentucky and MosquitoMate Inc., Cornel and CMAD staff are releasing male mosquitoes that have been infected with a bacterium, Wolbachia pipientis. When these males mate with local females, the females pick up Wolbachia, which causes them to lay eggs that will not hatch.

Special traps have been placed in the treatment area and in a nearby control area, where no Wolbachia-infected mosquitoes are released.

“Right now, the number of eggs we are getting is very much reduced in the treated site,” Cornel said.

Mosquitoes are generally susceptible to the lethal effects of insecticides.

“In mosquito control, we use insecticide concentrations much lower than is typically used for controlling other pests that hamper agricultural operations,” Cornel said.

Cornel maintains colonies of Aedes aegypti in the lab that are susceptible to insecticides. “These are colonies that have been with us for many years,” he said.

The experiments have shown that mosquitoes collected locally are resistant to almost all pyrethroid insecticides except one, Deltamethrin, which is not registered for mosquito control in California. However, these mosquitoes are also susceptible to organophosphate insecticides.

“Deltamethrin is used effectively in the European Union and other countries, but unfortunately, it is not yet available for use here,” Cornel said. “The company that makes the product is working to get California Department of Pesticide Regulation approval for using it in the state.”

“We placed susceptible and local mosquitoes in sentinel cages in a field and sprayed them from a truck 100-, 200- and 300-feet away in an open field situation,” Cornel said. “We recorded knockdown and mortality one hour and 24 hours after application.”

The field studies verified what the scientists found in their lab tests: local Aedes aegypti have developed resistance to most pyrethroids, but organophosphate insecticides offer effective control. However, the study doesn't prove what will happen in residential areas.

“We were in an open field, with no trees and houses to block the spread of the chemical,” Cornel said. “Now we should evaluate the efficacy of ultra-low-volume applications of malathion, an organophosphate, in a residential area.”

A well-known approach to reducing mosquito populations is elimination of standing water where mosquitoes can breed. Bird baths, abandoned toys, old tires and drainage plates under potted plants are all potential receptacles for standing water and should be discarded or kept dry. Less obvious are underground yard drains often found in newer housing developments. The scientists believe that the drains, designed to channel rain or irrigation runoff to the gutter in front of the house, may leave a perpetual supply of standing water in the buried pipe beneath the soil surface, which provide sites for mosquito development.

To test the theory, the CMAD personnel went door to door in a Clovis neighborhood to work with residents to eliminate water sources and to place fine netting on the ends of the drainage pipes.

“We have 80 percent compliance in the testing area,” Cornel said. “A few people have refused, which surprised me. But most of the residents were willing to help.”

The district is monitoring mosquito traps placed in the test area and in another Clovis neighborhood where yard drains haven't been netted.

“We have no results yet. When the study is done, CMAD will give me the data and I will analyze it,” Cornel said. “If I do see a statistically significant impact on mosquito populations, then that will confirm our suspicions and give us more convincing information to share in communities with Aedes aegypti to get them to eliminate even unseen potential mosquito breeding sites.”

If the yard drains are a confirmed mosquito breeding location, it may require a redesign to make sure that they do not hold water.

Scientists have sequenced the genome of Aedes aegypti and are using genetics to understand the movement of the pest in California.

“We want to know if the population in California comes from multiple introductions, or from a single introduction that has subsequently spread,” Cornel said.

This research is being done in collaboration with Gregory Lanzaro, Ph.D., and Yoosook Lee, Ph.D., in the Department of Pathology, Microbiology and Immunology at UC Davis, and has not yet been published, but preliminary results show that the population of Aedes aegypti that is south of the Tehachapi Mountains is probably from a separate introduction than the one that settled in Fresno, Clovis and Madera.

The scientists are also using genetics to determine the mosquitoes' dispersal patterns.

“We need to know this to help us develop effective control strategies,” Cornel said. “For example, if we've located an area with a large number of mosquitoes, we need to know how large an area we have to treat.”

The general consensus from studies around the world is that these mosquitoes don't fly very far from their development site.

“We're finding much the same here, usually no more than 80 meters,” he said. “Except, there are always a few males that disperse long distances within 24 hours – sometimes over 300 meters in one night.”