The Blue-Winged Amazon: A New Parrot Species From the Yucatán Peninsula

The newly identified Blue-winged Amazon parrot has a loud, short call and evolved from the White-fronted parrot quite recently, about 120,000 years ago.

The male of the new Amazona 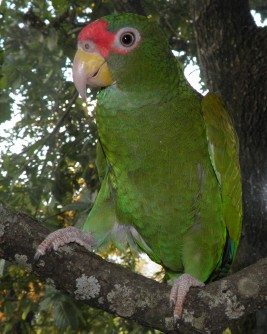 The male of the new Amazona 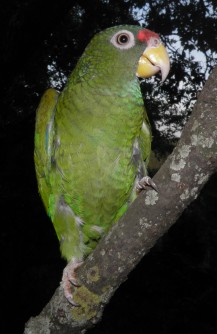 The female of the new Amazona 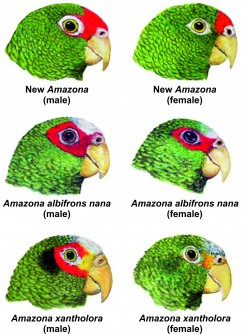 Head coloration of the new Amazona in comparison to other parrots, Amazona albifrons nana and Amazona xantholora, also from the Yucatán Peninsula, Mexico.

Newswise — In 2014, during a visit to a remote part of the Yucatán Peninsula in Mexico, ornithologist Dr. Miguel A. Gómez Garza came across parrots with a completely different colour pattern from other known species.

A study published today in the open-access journal PeerJ names these birds as a new species based on its distinctive shape, colour pattern, call and behaviour. The paper compares and contrasts the distinguishing features of this species with many other parrots.

The new parrot (Amazona gomezgarzai), referred to as the Blue-winged Amazon because of its primarily blue covert feathers, is characterized by its unique green crown that contrast to blue in other Amazon parrots. This new parrot occupies a similar area in the Yucatán Peninsula as the Yucatán Amazon (A. xantholora) and the White-fronted Amazon (A. albifrons nana) but it does not hybridize with them.

A very distinctive feature of the new taxon is its call, which is loud, sharp, short, repetitive and monotonous; one particular vocalization is more reminiscent of an Accipiter than of any known parrot. The duration of syllables is much longer than in other Amazon parrot species. In flight, the call is a loud, short, sharp and repetitive yak-yak-yak. While perched, the call is mellow and prolonged.

This species lives in small flocks of less than 12 individuals. Pairs and their offspring have a tendency to remain together and are discernible in groups. Like all members of the genus Amazona, this parrot is a herbivore. Its diet consists of seeds, fruits, flowers and leaves obtained in the tree canopy.

The analysis of mitochondrial DNA genes indicates that the blue-winged Amazon has emerged quite recently, or about 120,000 years ago, from within the A. albifrons population. During this time, the taxon differentiated sufficiently to be clearly recognizable as a new species.

There is no conservation program currently in effect to preserve this parrot but its small range and rarity should make its conservation a priority.

Image 3. The male of the new Amazona during its daily activities. Image credit: Tony Silva

Available as WAV files in the media pack link below.

PDF of this Press Release: http://static.peerj.com/pressReleases/2017/06/Press-Release-Mackiewicz.pdf

Link to the Published Version of the article (quote this link in your story – the link will ONLY work after the embargo lifts): www.peerj.com/articles/3475  your readers will be able to freely access this article at this URL.

Citation to the article: Silva et al. (2017), A new parrot taxon from the Yucatán Peninsula, Mexico—its position within genus Amazona based on morphology and molecular phylogeny. PeerJ 5:e3475; DOI 10.7717/peerj.3475

PeerJ is an Open Access publisher of two peer-reviewed journals and a preprint server. PeerJ is based in San Diego, CA and the UK and can be accessed at https://peerj.com/. PeerJ’s mission is to help the world efficiently publish its knowledge.  All works published in PeerJ are Open Access and published using a Creative Commons license (CC-BY 4.0). Everything is immediately available—to read, download, redistribute, include in databases and otherwise use—without cost to anyone, anywhere, subject only to the condition that the original authors and source are properly attributed.  PeerJ has an Editorial Board of over 1,600 respected academics, including 5 Nobel Laureates. PeerJ was the recipient of the 2013 ALPSP Award for Publishing Innovation. PeerJ Media Resources (including logos) can be found at: https://peerj.com/about/press/