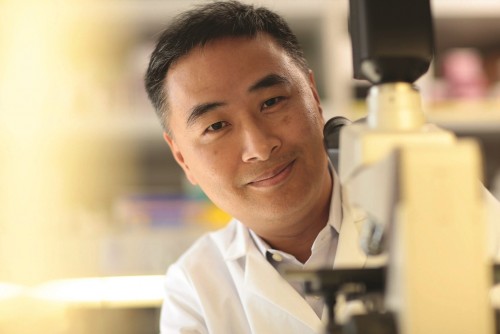 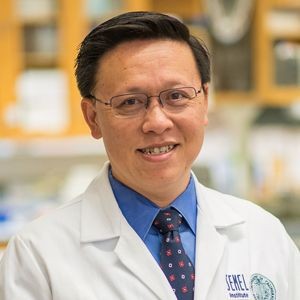 Alzheimer’s disease affects more than 47 million people worldwide, a number expected to grow as the population ages. One of the hallmarks of the disease is the accumulation of amyloid plaques that form between neurons and interfere with brain function. Many drug companies have been working for years to reduce amyloid beta production to thwart Alzheimer’s—but with minimal success.

“TREM2 offers a potential new strategy,” says Xu. “Researchers have known that mutations in TREM2 significantly increase Alzheimer’s risk, indicating a fundamental role for this particular receptor in protecting the brain. This new research reveals specific details about how TREM2 works, and supports future therapeutic strategies to strengthen the link between amyloid beta and TREM2, as well as increasing TREM2 levels in the brain to protect against pathological features of the disease."

Xu led the first study (TREM2 is a receptor for β-amyloid which mediates microglial function), showing that TREM2 binds quite specifically to amyloid beta. In particular, it connects with amyloid beta oligomers (proteins that bind together to form a polymer), which are the protein’s most toxic configuration. Without TREM2, microglia were much less successful at binding to, and clearing out, amyloid beta.

“These studies are important because they show that in addition to rescuing the pathology associated with Alzheimer’s disease, we are able to reduce the behavioral deficits with TREM2,” says Xu. “To our knowledge this provides convincing evidence that minimizing amyloid beta levels alleviates Alzheimer’s disease symptoms.” As they learn more about how TREM2 modulates the amyloid signals that put microglia to work, the Xu lab and other researchers have their work cut out for them.

“It could be beneficial in early stages to activate microglia to eat up amyloid beta,” says Xu, “but if you over-activate them, they may release an overabundance of cytokines (causing extensive inflammation) damaging healthy synaptic junctions as a side-effect from overactivation.”

Still, the ability to use the brain’s existing immune mechanisms to clear amyloid offers intriguing possibilities.

“Going after microglia, rather than amyloid beta generation, may be a new research avenue for Alzheimer’s disease,” says Xu. “We could use brain immune cells to solve what’s becoming a public health crisis.”