The Brain’s Super-Sensitivity to Curbs 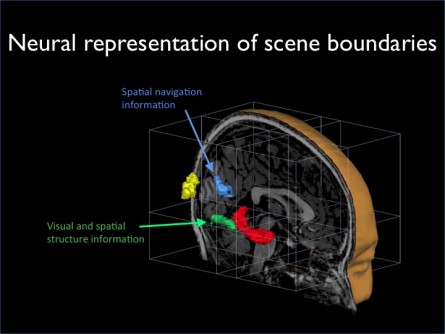 An illustration showing the portions of the brain involved in perception of a visual boundary, like a curb or a wall.

The Brain’s Super-Sensitivity to Curbs

Newswise — Humans rely on boundaries like walls and curbs for navigation, and Johns Hopkins University researchers have pinpointed the areas of the brain most sensitive to even the tiniest borders.

“There is something giving ecological validity to a boundary — even a very small one,” said author Soojin Park, an assistant professor in the Department of Cognitive Science. “The boundaries in an environment hugely influence how we move within it. We wondered, what’s the neural mechanism behind that?”

“The curb is so important and the brain is so sensitive to it, brain activity jumps significantly when someone sees one,” Park said. “There’s something very important about having that three-dimensional vertical structure.”

The reaction was the same even when the researchers changed the look of the mat, curb and wall, and the type of object displayed.

The part of the brain that reacted to the visual and spatial structure of a boundary, or when subjects saw a curb or a wall, is the “parahippocampal place area.” This region responds preferentially to images of scenes and places over other objects or faces.

It was the “retrosplenial complex” that reacted when subjects saw a boundary tall enough to be an obstacle. Just like the parahippocampal place area, this region responds preferentially to scenes, but recent research found that this region is important for spatial navigation rather than visual analysis of individual scenes.