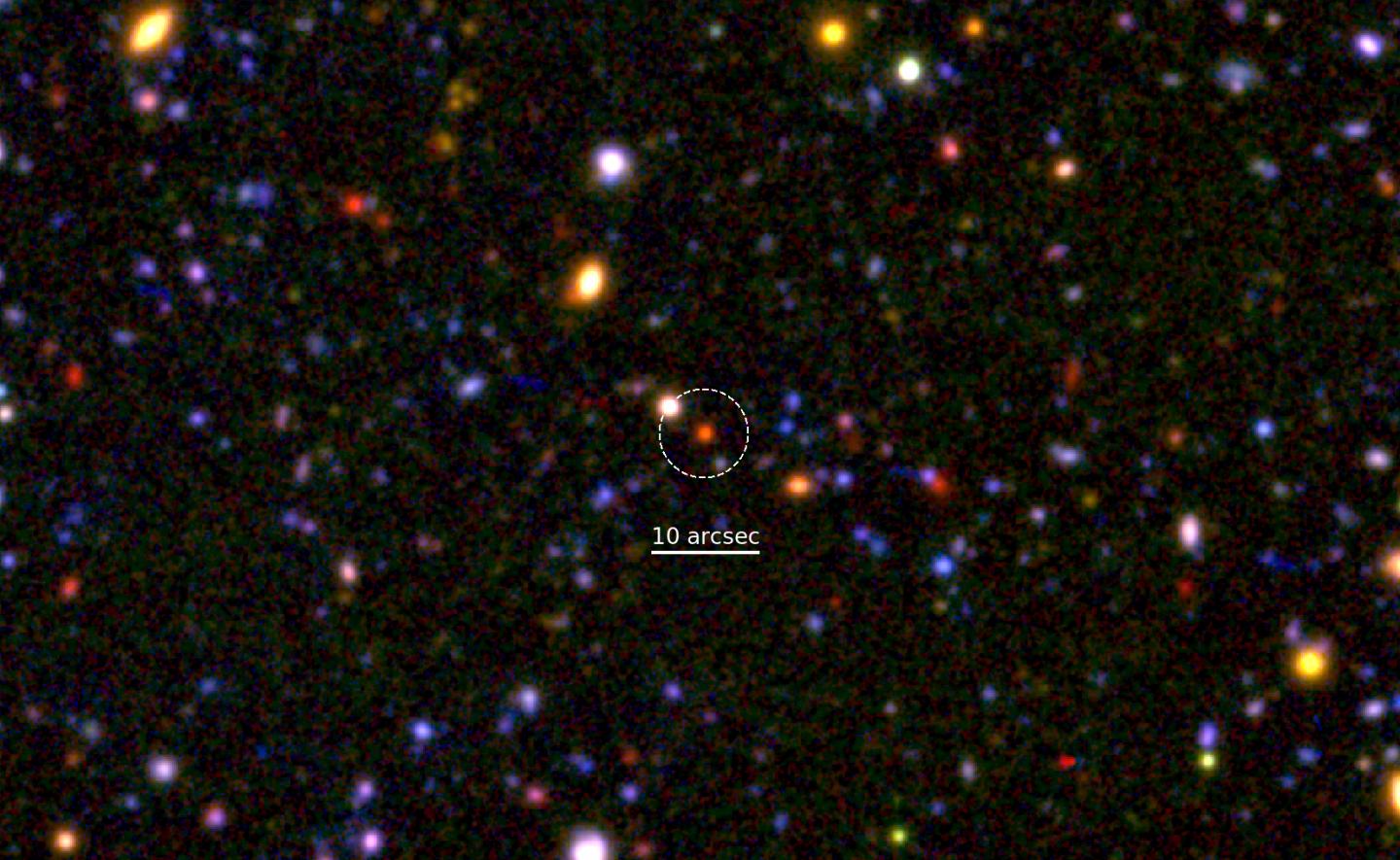 The red galaxy at the center is a dying galaxy at 12 billion years ago. Astronomers measured the motion of stars in the galaxy and found that the core of the galaxy is nearly fully formed.

Newswise — Astrophysics, Galaxies: The most distant dying galaxy discovered so far, more massive than our Milky Way -- with more than a trillion stars -- has revealed that the 'cores' of these systems had formed already 1.5 billion years after the Big Bang, about 1 billion years earlier than previous measurements revealed. The discovery will add to our knowledge on the formation of the Universe more generally, and may cause the computer models astronomers use, one of the most fundamental tools, to be revised. The result was obtained in close collaboration with Masayuki Tanaka and his colleagues at the National Observatory of Japan is now published in two works in the Astrophysical Journal Letters and the Astrophysical Journal.

What is a "dead" galaxy?

A team of researchers of the Cosmic Dawn Center at the Niels Bohr Institute and the National Observatory of Japan recently discovered a massive galaxy dying already 1.5 billion years after the Big Bang, the most distant of its kind. "Moreover, we found that its core seems already fully formed at that time", says Masayuki Tanaka, the author of the letter. "This result pairs up with the fact that, when these dying gigantic systems were still alive and forming stars, they might have not been that extreme compared with the average population of galaxies", adds Francesco Valentino, assistant professor at the Cosmic Dawn Center at the Niels Bohr Institute and author of an article on the past history of dead galaxies appeared in the Astrophysical Journal.

Why do galaxies die? - One of the biggest and still unanswered questions in astrophysics

"The suppressed star formation tells us that a galaxy is dying, sadly, but that is exactly the kind of galaxy we want to study in detail to understand why it dies", continues Valentino. One of the biggest questions that astrophysics still has not answered is how a galaxy goes from being star-forming to being dead. For instance, the Milky Way is still alive and slowly forming new stars, but not too far away (in astronomical terms), the central galaxy of the Virgo cluster - M87 - is dead and completely different. Why is that? "It might have to do with the presence of gigantic and active black hole at the center of galaxies like M87" Valentino says.

Earth based telescopes find extremes - but astronomers look for normality

One of the problems in observing galaxies in this much detail is that the telescopes available now on Earth are generally able to find only the most extreme systems. However, the key to describe the history of the Universe is held by the vastly more numerous population of normal objects. "Since we are trying hard to discover this normality, the current observational limitations are an obstacle that has to be overcome."

The new James Webb Space Telescope, scheduled for launch in 2021, will be able to provide the astronomers with data in a level of detail that should be able to map exactly this "normality". The methods developed in close collaboration between the Japanese team and the team at the Niels Bohr Institute have already proven to be successful, given the recent result. "This is significant, because it will enable us to look for the most promising galaxies from the start, when JWST gives us access to much higher quality data" Francesco Valentino explains.

Combining observations with the tool - the computer models of the Universe

What has been found observationally is not too far away from what the most recent models predict. "Until very recently, we did not have many observations to compare with the models. However, the situation is in rapid evolution, and with JWST we will have valuable larger samples of ``normal'' galaxies in a few years. The more galaxies we can study, the better we are able to understand the properties or situations leading to a certain state - if the galaxy is alive, quenching or dead. It is basically a question of writing the history of the Universe correctly, and in greater and greater detail. At the same time, we are tuning the computer models to take our observations into account, which will be a huge improvement, not just for our branch of work, but for astronomy in general" Francesco Valentino explains.

The Cosmic Dawn Center is supported by the Danish National Research Foundation and Francesco Valentino's research by a grant from the Carlsberg Foundation: "Galaxies: Rise And Death".