‘The Devil Is in the Details’: Documenting Carbon Sequestration in Borneo 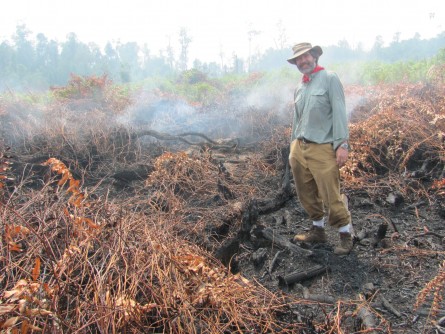 Smoke in the background provides evident that thin layers of the organic matter compacted beneath senior scientist Mark Cochrane’s feet are on fire. These peat fires can only be extinguished when the land floods. 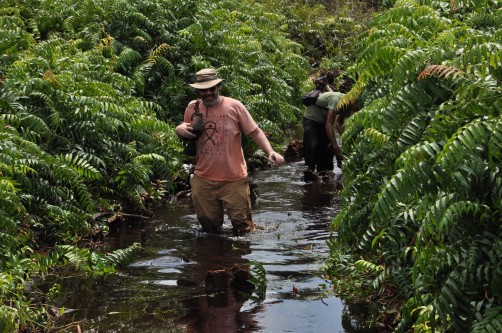 Senior scientist Mark Cochrane of the Geospatial Sciences Center for Excellence wades through drainage ditches carved in the Kalimantan peat swamp forest in Borneo as part of an ill-fated effort to convert 2.5 million acres of the forest into rice paddies.

Newswise — It’s that time of year again—the dry season in southeastern Asia when the Haze Wave begins. Smoke and particulates from Indonesian peat swamp fires on the island of Borneo drift drift across to neighboring countries.

“We treat it as a natural disaster, but it happens every year,” says Melvin Lee, a Malaysian whose parents live on the northwestern side of Borneo. “It affects the whole continent of Southeast Asia.”

Deforestation from an ill-fated plan to convert nearly 2.5 million acres of Kalimantan peat swamp forest into rice paddies has contributed to Indonesia becoming the third-largest emitter of carbon, according to professor Mark Cochrane, a senior scientist at the Geospatial Sciences Center for Excellence.

Through a three-year, $2.2 million grant from NASA, Cochrane and his team are using satellite imaging, field studies and modeling to help the Indonesian Forest Research and Development Agency assess the progress being made to reduce carbon emissions from Borneo’s ancient peat swamp forest.

He collaborates with carbon emissions expert Robert Yokelson, a chemistry professor from the University of Montana. The grant is part of NASA’s global carbon monitoring program, which is part of an international focus on reducing emissions due to deforestation.

Creating disastrous situationThe peat forest soils consist of large accumulations of dead organic matter, some of it tens of thousands of years old, that are more than 20 feet deep, Cochrane explains. When the land is drained, the organic matter compacts, decays and releases carbon. Once the logging companies completed their work, the indigenous people and a host of new settlers were left to figure out how to survive in this altered environment. That can mean burning to clear the peat surface for hunting, fishing and subsistence-level farming.

These peat fires can last for weeks or months, creating the thick smoke and suspended particulates that are carried to neighboring countries.

Cochrane estimates that the peat contains 20 times as much carbon as the forest trees themselves did. As part of his research, Cochrane hopes to figure out which fires are most likely to result in peat fires.

Quantifying reduced emissionsAn international program called reduced emission through deforestation and degradation, or REDD, offers monetary rewards to countries that reduce their carbon emissions, according to Cochrane. Another program, REDD Plus, takes this one step farther, making sure that the funds go to support the livelihoods of the people in the region, such as developing a sustainable logging system.

However, progress in carbon sequestration must be documented by a third party, he explains. That’s the challenge: “What does it take to credibly show that you’ve done something?”

The basic idea is simple, Cochrane says, but “the devil is in the details.”

As a first step, Cochrane and his colleagues analyzed satellite imaging of land cover as far back as 1993 to document when the forest was cleared and the land drained. But areas of forest that are simply thinned are harder to track, he explains.

Using laser mappingTo get a better read on the vegetation and hydrology, the researcher uses light detecting and ranging, commonly called LIDAR. The laser mapping technique gathers remote sensing data via an airplane. Nearly $20 million has been put into field data collection by the Australian government in recent years.

The initial dataset was collected in 2007 and a second in 2011. Looking at specific points that had surface fires, Cochrane can surmise that those areas that have gotten lower had peat soil losses as well due to subsurface fires.

Using these comparisons, Cochrane is developing a model to predict how much peat will be burned based on given conditions.

A third set of LIDAR data is being acquired this year. Comparison with the 2011 data will then allow Cochrane to adjust the statistical model. The goal is to develop a monitoring tool which will allow a third party to reliably estimate how much carbon is being lost and subsequently how that number has decreased over time, he explains.

Up to 200 different gases may be escaping through these fires, but no method currently exists to accurately determine the composition of peat fire emissions. In the past, researchers have estimated emissions by hacking out a block of peat and analyzing it in the lab, but Cochrane points out, “that’s not the way things burn in the field.”

Next year Yokelson will take his lab equipment into the field to monitor peat fires emissions, so the researchers can get “the best data for peat fire emissions anywhere in the world,” Cochrane says.

The tools these researchers develop will help the Indonesian government qualify for international support to further reduce its carbon footprint.

About the Geospatial Science Center of ExcellenceThe Geospatial Science Center of Excellence is a joint collaboration between South Dakota State University and the United States Geological Survey's National Center for Earth Resources Observation and Sciences. The purpose of the GSCE is to enable South Dakota State University faculty and students, and EROS scientists to carry out collaborative research, seek professional development, and implement educational programs in the applications of geographic information science. 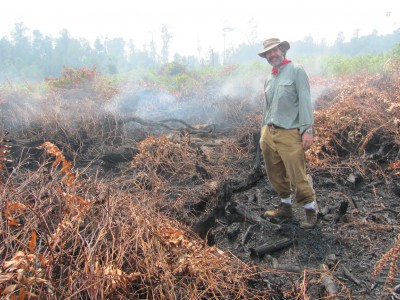 Caption: Smoke in the background provides evident that thin layers of the organic matter compacted beneath senior scientist Mark Cochrane’s feet are on fire. These peat fires can only be extinguished when the land floods. 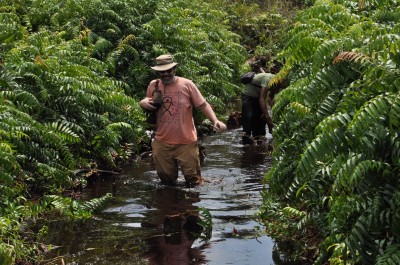 Caption: Senior scientist Mark Cochrane of the Geospatial Sciences Center for Excellence wades through drainage ditches carved in the Kalimantan peat swamp forest in Borneo as part of an ill-fated effort to convert 2.5 million acres of the forest into rice paddies.