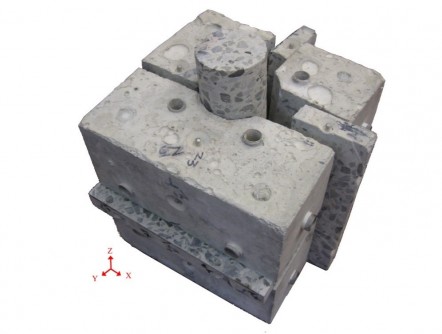 Dissection of a cube specimen (254 mm [10 in.] size) along three mutually perpendicular planes for examining cracking and a core drilled along the Z-axis for mechanical properties.

Concrete is the most commonly used construction material for many reasons including its excellent durability. Concrete, however, is not a foolproof material as it can be damaged from several unwanted chemical reactions. Alkali-silica reaction (ASR) is one such reaction. Many concrete structures around the world are suffering from ASR. Roughly speaking, ASR can be considered a type of cancer for concrete as this reaction occurs in concrete that contains reactive aggregate and is exposed to alkalis and water. The reaction is expansive and causes swelling of concrete. More importantly, once the reaction occurs there is little prospect that any external measures available can effectively mitigate the reaction and its damage, which primarily entails expansion, cracking, and loss of mechanical properties of concrete.

Although the reaction mechanism of ASR is understood, most measured expansion results are based on unrestrained laboratory concrete specimens; these limit the ability to predict multiaxial expansions in concrete structures that are subjected to stresses or restraints in one or multiple directions. Imagine a material that requires expansion that instead is squeezed or compressed; the mechanism of swelling will most likely be affected. If swelling is resisted in one direction, the material could swell in the remaining two directions at an undetermined rate. If swelling is resisted in two directions, the material could still swell in the third direction. What if, however, attempts are made to restrain the swelling in three directions?

For concrete, which is a solid material that consists of fluid materials such as water and the reaction products of ASR, the mechanism of swelling is complicated, particularly when concrete is subjected to multiaxial stresses. In addition, cracking and the loss of mechanical properties are also likely to be affected by the stress state. To some extent, cracking is linked to expansion and the loss of mechanical properties is linked to cracking. Structures worldwide, including dams and nuclear containment structures, are affected by this. The proper diagnosis of such structures is difficult without knowing the effect of multiaxial stresses on the ASR damage of concrete. To understand the effect of multiaxial stresses on ASR-affected concrete, research was conducted at the University of Toronto that involved an experimental investigation of more than 20 concrete cube specimens having no-stress, uniaxial, biaxial, and triaxial stress conditions. The research was conducted with funding from a contract with the Canadian Nuclear Safety Commission (CNSC). Cracking due to ASR has been observed in the concrete containment structure of a nuclear power plant in Canada with a structure that was biaxially prestressed and, thus, expected to be free from cracking.

Unlike the biaxial or triaxial tests that are usually performed in civil engineering experiments, this research study involved sustaining the stresses in the specimens over the study duration of approximately 18 months. A new method was developed for the application of stresses. It was a great challenge to maintain relatively constant stresses for more than a year in the specimens that were conditioned at 50°C and close to 100 percent relative humidity. Hot and humid conditions were necessary for accelerating the ASR. An accelerated chamber was constructed to condition the specimens at the desired temperature and humidity.

The specimens with multiaxial stresses were periodically measured for expansions in three directions from the day of demolding to exhaustion of the expansion potential. Alkali-silica reaction expansion was reduced in the direction of compressive stress and was transferred to a no-stress direction. Outcomes of the study revealed that ASR attempts to conserve the volumetric expansion in concrete were satisfactory, as long as one unstressed direction is available.

The specimens with multiaxial stresses were periodically measured for expansions in three directions from the day of demolding to exhaustion of the expansion potential. Alkali-silica reaction expansion was reduced in the direction of compressive stress and was transferred to a no-stress direction. Outcomes of the study revealed that ASR attempts to conserve the volumetric expansion in concrete were satisfactory, as long as one unstressed direction is available.

Slices from the cubes were microscopically examined for cracking along three mutually perpendicular planes. Similarly, cracking was examined along the surfaces of cube specimens. The effect of stress states was reflected in the cracking of concrete on different planes. Cracks were opened preferentially along the unstressed direction, or the direction with a relatively smaller compressive stress. Triaxial specimens showed markedly reduced cracking compared to the other stress conditions. Even though the triaxial confinement did not prevent the reaction, the triaxial confinement was effective to largely reduce the ASR damage of concrete.

The research outcomes reveal that stress state can markedly affect the ASR performance of concrete by affecting ASR expansion, influencing opening and orientation of ASR cracks, and associating directional effect on the mechanical properties of concrete. Consideration of stress state of concrete is equally important in planning field investigations of ASR-affected structures, particularly to ascertain the direction of expansion measurement and coring, and in interpreting the field investigation results. An accurate diagnosis and prognosis of an ASR-affected structure will be possible only when stress state is considered.

Research details are being published in an upcoming ACI Materials Journal article entitled, “The Effect of Multiaxial Stresses on the ASR Damage of Concrete.”