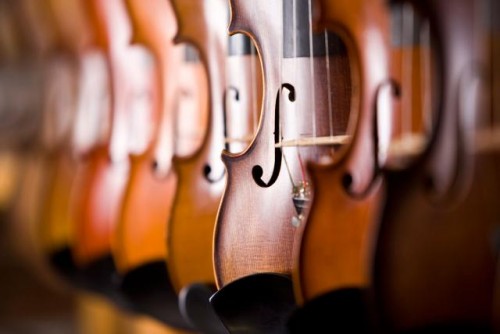 UI researchers say behavior, particularly psychologist Edward Thorndike’s law of effect, is the foundational principle behind the evolution of the violin and other handmade inventions. Simply put, behaviors that are followed by positive outcomes tend to be repeated.

Newswise — It’s tempting to believe the violin was created in the mind’s eye of its most famous craftsmen: the Amati, Stradivari, and Guarneri families.

After all, the beloved musical instrument is a thing of beauty. Art, you might say.

But researchers at the University of Iowa say it’s time to take a radically new look at the evolution of the violin—and other inventions, for that matter.

The UI researchers, however, say a basic law of behavior—psychologist Edward Thorndike’s law of effect—is the foundational principle behind the evolution of the violin, not the law of natural selection. Simply put, behaviors that are followed by positive outcomes tend to be repeated.

So, over time, luthiers—people who make violins and other stringed instruments—unwittingly inched toward reproducing violins that sounded better or were deemed, by others, to be more beautiful.

“Violin sound holes may have increased in length over several hundred years because they produced more volume, but violin makers didn’t consciously know that and plan those increases,” says Ed Wasserman, a psychology professor at the UI and coauthor of the paper. “There were likely to have been random variations in sound holes during the construction process, and those violins with longer sound holes were then more likely to have been favored by customers because of their superior acoustic properties.”

The paper, “Evolution of the Violin: The Law of Effects in Action” appeared Nov. 17 in the Journal of Experimental Psychology: Animal Learning and Cognition and is a review and theoretical analysis of two other recent studies about the same subject—one by MIT professor Nicholas Makris and the other by Dan Chitwood, a researcher at the Donald Danforth Plant Science Center in St. Louis, Missouri.

For their studies, the scientists examined changes in the physical attributes of the violin over time, such as its overall shape and the size of its sound holes.

Then, the UI researchers turned their attention to the luthiers.

“Those papers were physical science reports beautifully detailing construction details of early violins,” Wasserman says. “They suggested that the biological law of natural selection might provide insights into their results, but they were utterly unaware of a much better interpretive account: the behavioral law of effect.”

In their paper, Wasserman and co-author Patrick Cullen, a UI undergraduate majoring in biology, argue: “Violins did not evolve; rather, the behavior of the violin makers evolved. Once the matter is properly rephrased, it must be appreciated that any real insights into the changing shape of violins will come only when we can explain how and why violin makers changed their methods of fabrication.”

For Cullen, the paper provides an opportunity to “broaden our world view.”

"By that, I mean that by thinking abut the development of these man-made objects in the context of the law of effect, we realize that we are not actually that different from the natural world around us, despite our impressive achievements,” he explains.

Both the law of natural selection and the law of effect play out over an extended period of time.

“Measurable changes in the violin spanned the lifetimes of many violin makers,” says Ralph R. Miller, distinguished professor of psychology at the State University of New York at Binghamton and editor of Journal of Experimental Psychology: Animal Learning and Cognition. “A full account of violin evolution has to take into account the fact that generations of masters and apprentices worked in close collaboration with one another.

“They also saw the works of other violin makers,” he adds. “Thus, a social component—imitation—surely participated in the process.”

Miller believes the recent studies into the evolution of the violin have made way for a dramatically different view of how handmade things, such as violins, have come into being.

“Contrary to widely held beliefs, the romance of creative inspiration may not be as common as persistent cycles of variation, selection based on outcomes, and imitation,” Miller says. “Wasserman and Cullen make a compelling case for the law of effect in conjunction with imitation giving rise to invention.”