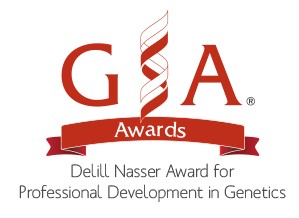 The DeLill Nasser Award for Professional Development in Genetics is given to graduate students and postdoctoral researchers by the Genetics Society of America.

Newswise — BETHESDA, MD – June 11, 2013 – The Genetics Society of America (GSA) is pleased to announce the selection of five early career researchers – one graduate student and four postdoctoral researchers – as recipients of a fall 2013 DeLill Nasser Award for Professional Development in Genetics. The award is a $1,000 travel grant for each researcher to attend any national or international meeting, conference or laboratory course that will enhance his or her career.

“The DeLill Nasser Award is one of GSA’s most inspiring programs because it enables the Society to play a direct role in supporting the professional development of our student and postdoc members,” said Adam Fagen, PhD, Executive Director of GSA. “It is clear that the future of genetics is bright, with researchers like these awardees leading the way.”

The DeLill Nasser Award was established by GSA in 2001 to honor its namesake, DeLill Nasser (1929–2000), a long-time GSA member who provided critical support to many early career researchers during her 22 years as program director in eukaryotic genetics at the National Science Foundation. Since the formation of this award, nearly 100 graduate students and postdocs have received funding for travel to further their career goals and enhance their education. The program is supported by GSA, and with charitable donations from members of the genetics community.

The five recipients of the fall 2013 DeLill Nasser Awards, their institutions and the conference or course each intends to attend are listed below. To see the pictures associated with this release, please click here.

Twice a year, GSA selects graduate students and postdoctoral researchers to receive DeLill Nasser Awards to assist them in acquiring career enrichment. For more information about these awards, visit the GSA website at http://www.genetics-gsa.org/awards/delill.shtml.

ABOUT GSA: Founded in 1931, the Genetics Society of America (GSA) is the professional membership organization for scientific researchers, educators, bioengineers, bioinformaticians and others interested in the field of genetics. Its nearly 5,000 members work to advance knowledge in the basic mechanisms of inheritance, from the molecular to the population level. The GSA is dedicated to promoting research in genetics and to facilitating communication among geneticists worldwide through its conferences, including the biennial conference on Model Organisms to Human Biology, an interdisciplinary meeting on current and cutting edge topics in genetics research, as well as annual and biennial meetings that focus on the genetics of particular organisms, including C. elegans, Drosophila, fungi, mice, yeast, and zebrafish. GSA publishes GENETICS, a leading journal in the field and an online, open-access journal, G3: Genes|Genomes|Genetics. For more information about GSA, please visitwww.genetics-gsa.org. Also follow GSA on Facebook at facebook.com/GeneticsGSA and on Twitter @GeneticsGSA.